..
Home International A WEST HAM fan lost his FINGER in a gruesome accident in... 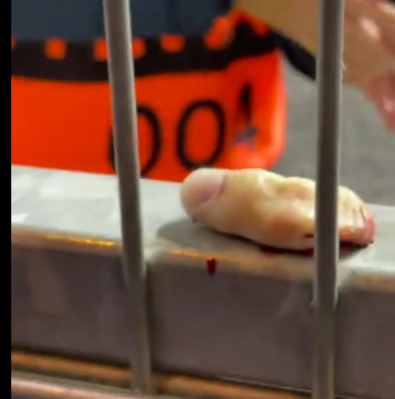 Footage emerged showing the supporter’s digit on the floor during the Hammers’ 2-2 Europa League draw in Belgium.

The video shows the end of the finger on the other side of a railing in the away end, with the apparent victim nowhere to be seen.

Fellow fans were heard urging stewards to put it on ice – with some claiming it took up to ten minutes for them to act.

It is understood the unhappy Hammer is now receiving medical attention.

West Ham fans had been enjoying their club’s second away game in Europe since midday and there are sure to be plenty of sore heads in the morning.

But that will be nothing compared to one man, with witnesses in the away end believing the horror incident happened after Said Benrahma had scored the second goal on 82 minutes.

Fans were seen banging their hands against the metal fences during wild celebrations.

Genk equalised minutes later as Tomas Soucek headed the ball past his own keeper.

But that was not enough to deny David Moyes’ side a spot in the knockout stages with two games to spare, having won each of their previous three clashes.

Such an achievement will likely please Moyes, who said celebrations of his 1000th game in management will have to wait until after the Liverpool match on Sunday.