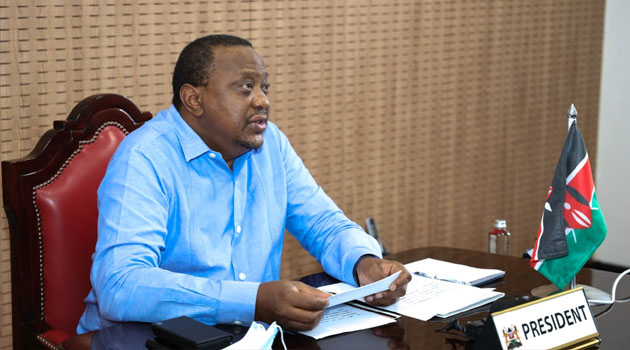 President Uhuru Kenyatta has called for urgent and bold interventions to deal with the challenges posed by climate change in Africa.

The President noted that the recent climate change attributed desert locust invasion of Eastern Africa as well as intermittent droughts and floods are a growing socioeconomic burden to the region.

“Exacerbated by climate change, the desert locust invasion of Kenya and other Eastern Africa countries has devastated livelihoods of farmers and poses an unprecedented threat to food security,” he said.

President Kenyatta spoke Wednesday at State House, Nairobi during the virtual launch of the African chapter of the Global Center on Adaption (GCA Africa).

The launch was hosted by the President of African Development Bank (AfDB) Akinwumi Adesina and addressed by several African leaders among them Presidents Nana Akufo-Addo (Ghana) and Sahle-Work Zewde (Ethiopia).

President Kenyatta said effects of climate change have been worsened by the global Covid-19 health crisis.

“Challenges posed by these climate-related events have been compounded by the ongoing Covid-19 pandemic.

“Though not directly linked to climate change, the global resources allocated to fighting Covid-19 and to mitigate its negative impact on the economy, have, no doubt, reduced what is available to address climate change,” he said.

He challenged GCA Africa to spearhead the up scaling of pilot adaptation projects such as Kenya’s livestock insurance scheme, the first of its kind in Africa, to the rest of the continent.

READ  Western by pass project is now 40 per cent complete

“Additionally, several adaptation initiatives that have been piloted in Africa should be scaled up by the centre we are launching today.

“These include the Kenya Livestock Insurance Programme, the first government livestock insurance scheme in Africa, and which protects pastoralists against drought; and the mangrove protection and restoration project as is being piloted in Gazi, Kenya,” he said.

The President thanked AfDB for its support in setting up IGAD Climate Prediction and Application Center (ICPAC) in Nairobi, a facility he said assists the region to receive timely climate prediction data.

In his opening remarks, Mr Adesina announced that AfDB is working on raising amounts available for investment in Africa’s climate smart projects to 25 billion USD by 2025.

Kudos to KeNHA; Read this touching story of a friend of mine: