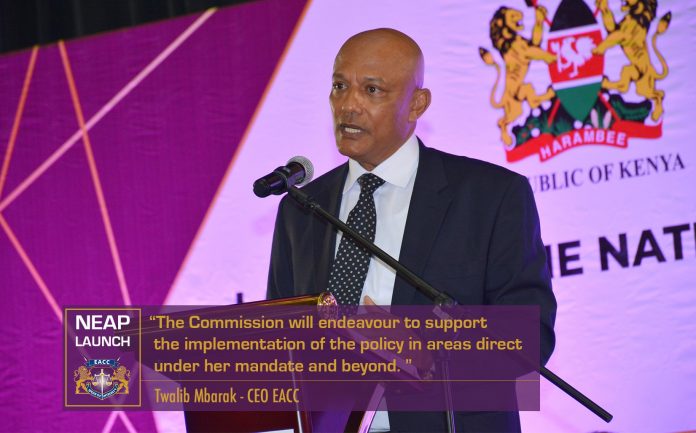 Agencies fighting corruption have once again asked Kenyan to take the forefront in the fight. – By Collins Osanya

The sentiments were made by key note speakers during the recently concluded launch of the National Ethics and Anti-Corruption Policy, (NEAP) Session Paper 2 at the Kenyatta International Conference Center (KICC).

Speaking at the event, Ethics and Anti-Corruption Commission (EACC) boss Twalib Mbarak asked Kenyans not to cheer perpetrators of corruption.

“We owe it to our republic to get to a point when corruption will neither be uneasy nor a convenient choice for any of our citizens and residents. Justice works best in a well regulated and predictable system.” read the statement.

DPP Haji also highlighted that fighting corruption is a multi-sectoral effort which requires a multifaceted approach, from intelligence gathering, accumulation of evidence to the general prosecution.

In his remarks, Director of Criminal Investigation (DCI) George Kinoti informed Kenyans that they have what it takes to fight corruption.

“The revolution against corruption starts from our own conscience, and that is the only wealth that will remain with ourselves,” the DCI explained.

NEAP came into existence after a 26 March, 2015 directive by President Uhuru Kenyatta during his State of the Nation Address to Parliament where he instituted the National Anti-Corruption Campaign Steering Committee (NACCSC).

NACCSC is a multi-agency task force obligated with reviewing the existing legal, policy and institutional framework for fighting corruption in Kenya.