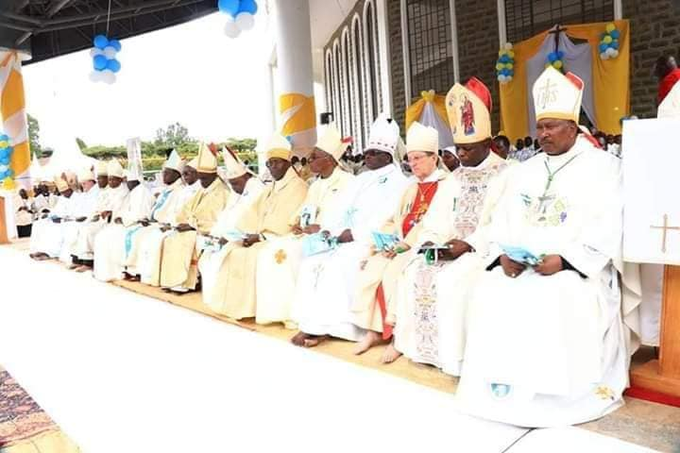 Did Catholic Bishops pronounce a curse on corrupt individuals after walking barefoot at Subukia Shrine? This is the well-founded fear sweeping across the country as Catholics ponder the import of the Apostolic gesture.

It is unheralded for a Bishop to walk barefoot in Church, and especially in the solemn manner in which this was done. The contents of the Apostolic letter were also telling….comparing themselves to David on the fight against Goliath(corruption), the Bishops asked Kenyans to accept suffering for the sake of crashing and ending corruption.

They extolled a concern by the Pope during a visit to Kenya in which he urged President Kenyatta to root out corruption. And by so doing, the Church is clear that suspect cash will not be welcome despite the many deserving projects the Church would want to put up.

Pope Francis has variously decried the rise in corruption in Kenya…variously giving the analogy of an Argentine man whose coffin could not close due to stolen cash.

In the solemn apostolic declaration, the Bishops on Saturday walked barefoot in occasion to urge Kenyans to crash corruption.
It is the first time in the history of the Catholic Church leadership that the leadership of the Church has resorted to such drastic measures.

In a show of solidarity to the suffering of the poor as a result of corruption, the Bishops stopped short of rejecting suspect cash for all and sundry, but welcomed modest contributions from the public.

The Bishops issued a hard hitting letter to all Catholics and the state and said time to deal with graft is now. It is a universal belief among Roman Catholics that willful disobedience to a Bishop, if not corrected can lead to dire consequences.

The Pope is the Bishop of Rome, from where he exercises his Apostolic duties first as a cleric.

Ngilu Back On Her Feet After COVID-19 Scare