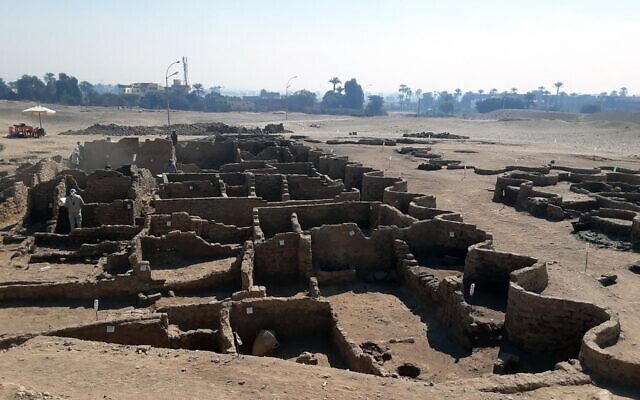 (XINHUA) – An Egyptian archeological mission announced on Thursday the discovery of a 3000-year-old “Lost Gold City” (LGC) in Egypt’s monument-rich city of Luxor.

An Egyptian mission, headed by renowned Egyptian archeologist Zahi Hawass, in collaboration with Egypt’s Supreme Council of Antiquities, found the city that was lost under the sand.

The city was known as “The Rise of Aten,” dates back to the reign of Amenhotep III and continued to be used by king Tutankhamun.

“Many foreign missions worked in this area in search for the mortuary temple of Tutankhamun because the temples of both Horemheb and Ay were found here,” Hawass said in a statement, adding those missions failed to find the city.

Terming the discovery as the largest city ever found in Egypt, Hawass explained that “the LGC was Founded by one of the greatest rulers of Egypt, king Amenhotep III, the ninth king of the 18th dynasty who ruled Egypt from 1391 till 1353 B.C.”

His son, the famous Amenhotep IV (Akhenaton), shared king Amenhotep III in ruling the city for eight years, he added.

The LGC was the largest administrative and industrial settlement in the era of the Egyptian empire on the western bank of Luxor, he said, pointing out the mission unearthed some of the city’s streets that are flanked by houses, with walls are up to 3 meters high.

The Egyptian mission, which started working on the discovery in September 2020, has found a well-preserved city with almost complete walls, and with rooms filled with tools of daily life.

“The discovery of this lost city is the second most important archeological discovery since the tomb of Tutankhamun,” said Betsy Brian, professor of Egyptology at Johns Hopkins University in the United States.

She added the discovery will help shed light on one of history’s greatest mystery: why did Akhenaten and Nefertiti decide to move to Amarna, which is an extensive Egyptian archeological site that represents the remains of the capital city newly established in 1346 B.C. and built by Akhenaten in late the eighth dynasty.

The mission’s first goal was to date the establishment of the city, according to the statement that added hieroglyphic inscriptions found on clay caps of wine vessels.

The new discovery consisted of three royal palaces of King Amenhotep III, as well as the Empire’s administrative and industrial center based on the historical references.

Rings, scarabs, colored pottery vessels, and mud bricks bearing seals of King Amenhotep III’s cartouche that were found during the discovery confirmed the dating of the city, Hawass added.

In the southern part of the city, the mission found a bakery, a cooking and food preparation area completed with ovens and storage pottery.

“From its size, we can state the kitchen was catering a very large number of workers and employees,” Hawass added.

The second part of the city, which is still partly uncovered, is predicted to be the administrative and residential district with larger and well-arranged units. It is fenced in by a zigzag wall, with only one access point leading to internal corridors and residential areas.

Zigzag walls are one of the rare architectural elements in ancient Egyptian architecture, mainly used at the end of the 18th Dynasty, Hawass added.

Meanwhile, the third area is the workshop that included the production area for the mud bricks used to build temples and annexes. The bricks have seals bearing the cartouche of King Amenhotep III (Neb Maat Ra).

The mission has also unearthed many tools used in spinning, weaving, and glass-making slag, Hawass added.

Investigations are underway over the finds of two unusual burials of a cow or bull found inside one of the rooms, as well as a burial of a person with arms outstretched to his side, and remains of a rope wrapped around his knees, he added.