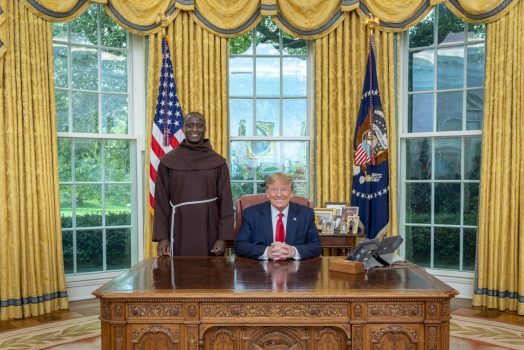 BY FAITH MUTETE – “His dedication, hard work, and belief in his student’s talent have led his poorly resourced school in Kenya to emerge victorious after taking on the country’s best schools in national science competitions. Peter, you inspire us all! Thank you for your commitment to your students,” these are words said by White House Press Secretary Stephanie Grisham as he praised. Peter Tabichi, the Kenyan teacher who won the 2019 Global Teacher Prize.

Peter Tabichi met the U.S president Donald Trump on Monday as he is attending the United Nations General Assembly and the White House has applauded him for his generosity to his student.

He won the Varkey Foundation $1 million (Ksh.100 million) Global Teacher Prize in March this year. And Since then, he has been invited as a speaker to global summits in South Africa, Botswana, Argentina, Chile, Columbia and the U.S.

The 36-year-old attributes his success to his father who he described as ‘generous with his pupils and his time.’