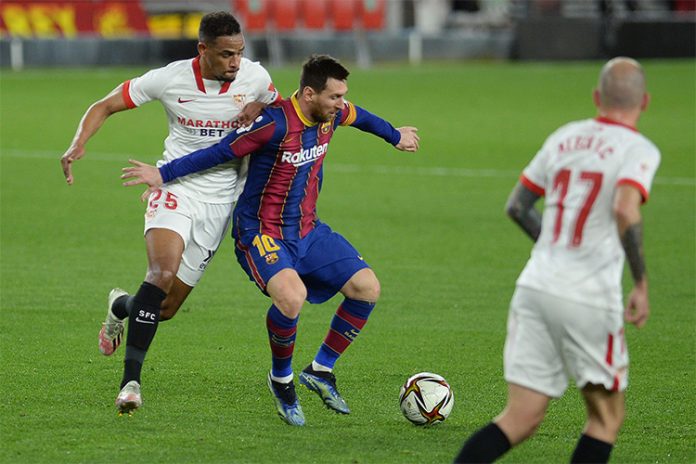 For the third straight round in this season’s Copa del Rey, Barcelona habe made a superb comeback after a brilliant 3-0 victory over Sevilla in extra time to reach the Spanish Cup Final.

Cup experts Barca turned around a 2-0 deficit from the first leg. Goals from Dembélé, Piqué and Braithwaite turned the tie around and gave the blaugranes a 3-2 aggregate win after extra time.

The next date in the Copa del Rey diary is 17 April, the final, where they will now face either Athletic Club or Levante in final number 42 for the blaugranes.

The visitors started the game pressing high and trying to force Barca into mistakes, but Ronald Koeman’s men did a good job building from the back. Sevilla quickly decided to focus on defending their two goal lead closer to their box.

From the start, Barca were intense and attacked intentionally. They were rewarded an early goal thanks to a long distance strike from Ousmane Dembélé.

In the second half, Sevilla slowly grew into the game, having more touches and possession. They earned a penalty when Oscar Mingueza brought down Lucas Ocampos in the box. Marc André ter Stegen made a penalty save.

Sevilla were devastated for their fans after being stunned by a second defeat to Barcelona in a week, the latest loss preventing an appearance in the Copa del Rey final. They are now out of the Copa del Rey and 10 points behind La Liga leaders Atletico Madrid.

“We experienced the most crushing feeling in football conceding with the last kick of the ball,” manager Julen Lopetegui said.

“We are really hurt. We feel so bad for all of our fans. We could have won it with the penalty.”

Beyond trying to finish in the top four of La Liga, Sevilla will put their 2020-21 hopes to their last-16 Champions League match against Borussia Dortmund on March 9. If they successfully overturn a 3-2 aggregate deficit, then the Barcelona defeat might sting less for them.