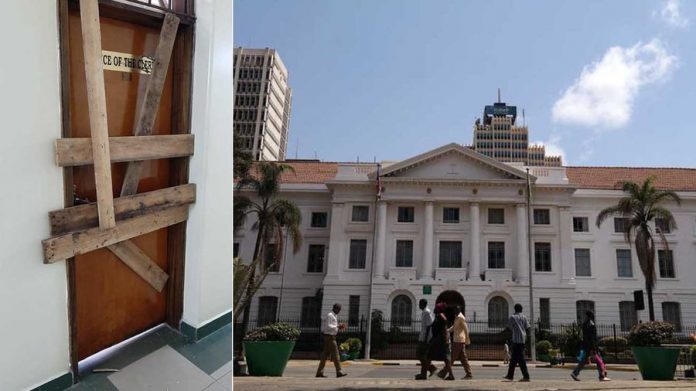 Nairobi County assembly was this morning filled with teargas as suspected goons fired teargas into the government facility in what is seen as a protest by county MCAs to reject the ousting of Abdi Guyo and Waithera Chege as the Majority leader and Minority Whip, respectively.

The changes, suspected to be made to celebrate those who stood by Beatrice Elachi sparked outrage by a section of those opposing Elachi.

Nairobi County Speaker Beatrice Elachi defended the appointments, claiming that the law was followed in the process.

“The changes are official because they have already been tabled on the floor of the house. However, if there is any issue the members should take it up with the party,” said Ms. Elachi.

In response to the removal, the Matopeni Ward representative blasted the Speaker for resorting to ‘Kangaroo” ways of doing things. He went on to demand a vote saying that he will still win the majority seat.

“None of the said two ways has been followed. There was no meeting called and so it is useless. I am ready, if the whip calls for elections, and anyone wins against me I will support the victor. However, no kangaroo things. They know I will still win if the election is called and so they are trying to do it through kangaroo things,” said Mr Guyo.