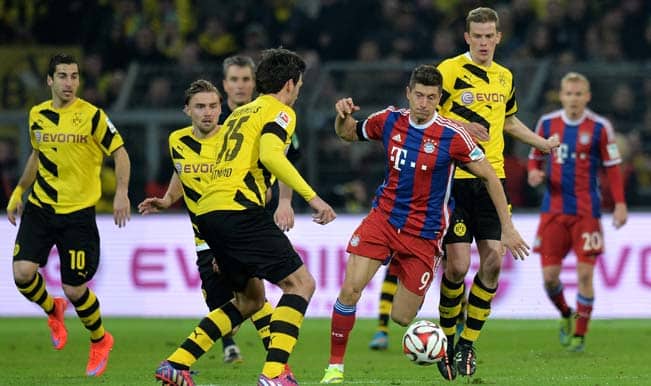 Bayern Munich are on course to win an eighth successive Bundesliga title thanks to Joshua Kimmich’s superb goal in a 1-0 win over Borussia Dortmund.

Kimmich opened the scoring in the 43rd minute when he chipped Dortmund goalkeeper Roman Burki from 20 yards.

Erling Haaland almost gave Dortmund a first-minute lead, but his shot was cleared off the line by Jerome Boateng.

Serge Gnabry suffered the same fate as Haaland at the other end, before Kingsley Coman stung Burki’s palms.

But the game was settled with a bit of magic from Kimmich.

Jadon Sancho, who was not deemed fit enough to start due to a calf strain, and Emre Can were brought on at half-time by Lucien Favre.

Dortmund had a strong claim for a penalty when Haaland’s shot deflected off Boateng’s arm, however, referee Tobias Stieler did not point to the spot and VAR was surprisingly not called upon.

Sancho almost made the desired impact off the bench when his inviting 67th-minute cross was just missed by Haaland, who appeared to limp off when he was replaced by Giovanni Reyna immediately afterwards.

Mahmoud Dahoud had a shot beaten away by Manuel Neuer with 10 minutes to go, before the post denied Robert Lewandowski from doubling Bayern’s lead.

The Bundesliga leaders defended valiantly as they held on for a vital three points.