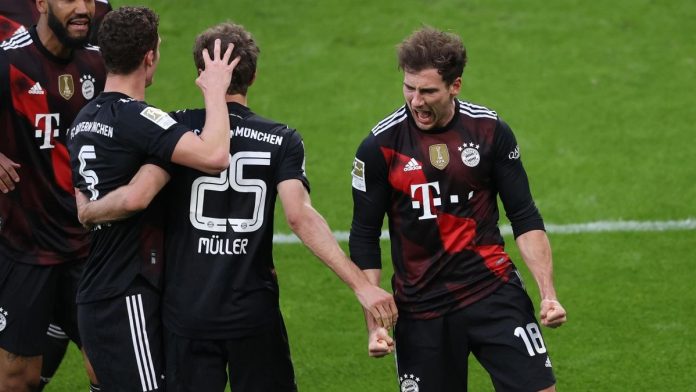 FC Bayern beat RB Leipzig on Saturday evening, extending their lead at the top of the table to seven points and taking a giant stride towards their ninth straight Bundesliga title.

Leon Goretzka scored the match-winner late in the first half of a very intense match.

The German record champions started with Manuel Neuer in goal and Benjamin Pavard, Niklas Süle, David Alaba and Lucas Hernández in a back four.

Jamal Musiala and Serge Gnabry took over from Goretzka and Coman midway through the second half, Javi Martínez coming on for Sané with ten minutes to go.

The first half was an intense tactical skirmish between two evenly-matched sides. Leipzig dominated possession in the first half-hour but both sides had half-chances.

RB’s Emil Forsberg saw two efforts go wide before a Coman effort was blocked, Choupo-Moting firing wide on the rebound. A Coman centre soon found Müller at the near post, but the native Bavarian could not turn in goalwards.

Munich asserted their authority now, and Kimmich’s through-ball soon found Müller, who sidestepped an opponent before inviting Goretzka to blast home from 15 yards.

Keeper Peter Gulácsi proved equal to a Choupo-Moting header, and the sides turned round with Bayern a goal to the good.

The result means FCB have 64 points from 27 matches, seven clear of the men from Saxony. The Bavarians will be back in action on Wednesday, when they entertain Paris Saint-Germain in the Champions League quarter-finals.