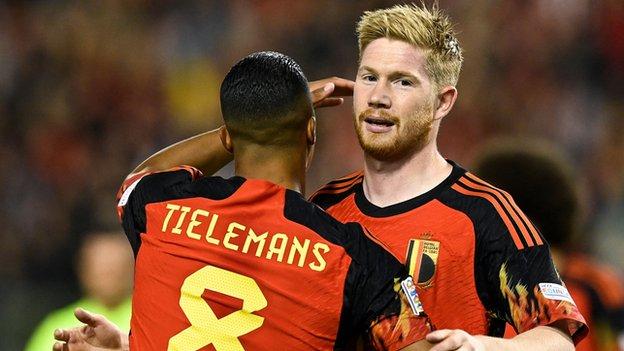 Kevin de Bruyne was at his masterful best as Belgium withstood a spirited fightback from Wales to leave them teetering on the brink of relegation in the Nations League.

De Bruyne casually stroked in the opening goal from the edge of the penalty area and hit the post with another shot from a similar distance before crossing for Michy Batshuayi to tap in the home side’s second.

Belgium’s 2-0 half-time lead was no reflection of their avalanche of chances, and that advantage was cut in half when Kieffer Moore headed in from Brennan Johnson’s beautifully flighted cross.

After Belgium had a penalty overturned by the video assistant referee as replays showed Joe Morrell had cleanly dispossessed De Bruyne, Wales pushed for an unlikely late equaliser but were thwarted by a home side who could not have envisaged such a nervy conclusion to a game they seemed destined to win at a canter.

With Poland losing at home to the Netherlands, Wales must now beat Poland in Cardiff on Sunday to keep their place in the top flight of the Nations League.

Robert Lewandowski and company will pose Robert Page’s men with another stern challenge and, while Poland may not be of the same standard of this stellar Belgian side, Wales will still be without numerous first-team players due to injury.

The absence of the likes of Ben Davies, Aaron Ramsey, Joe Allen and Harry Wilson was keenly felt in Brussels, but a brave second-half display offered enough encouragement to suggest Wales belong at this level.

Read More  End Of The Road For Gareth Southgate?