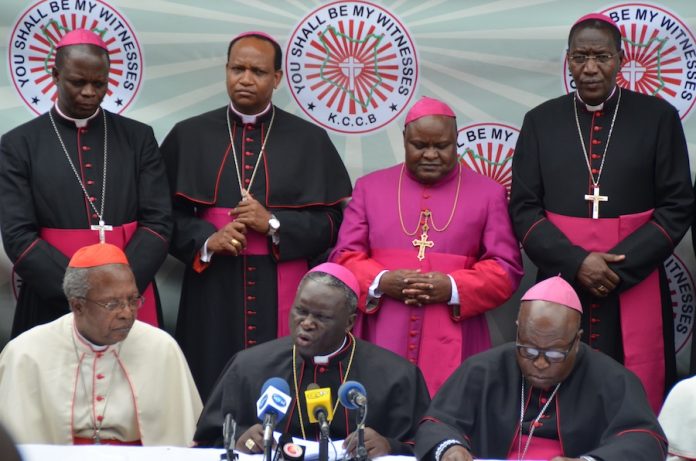 BY PRUDENCE WANZA – Bishop Philip Anyolo has urged Kenyans not give up on the face of rampant corruption happening in the country during the Kenya Conference of Catholic Bishops (KCCB).

He has raised concerns of the current political bickering and utterances that are slowing our country from moving forward in a meaningful way that will bring development and National Integration to the country. The bishop has reiterated on the issue of Kenyans in many parts of the country languishing in poverty, lacking food and having to depend on handouts and relief yet billions of shillings have been allocated for the emergencies are stolen.

The Bishop also raised concerns on the worrying trend of youths taking their own lives while others are murdered in bizarre circumstances never heard before. “It is obvious that a society where the young people see no hope and no future is doomed and sooner or later will descend into chaos, instability, and civil unrest.” He added that a unless we all come back to our senses and seek the right way, peace and stability we so far experienced will be a thing of the past.

In his press statement the Bishop has proposed the actions to be taken in order to tackle this menace of corruption.

That the Catholic church in Kenya, the Kenya conference of Catholic Bishops,priests,dioceses, parishes and small Christian communities will fight corruption by all means, by rejecting all forms of corrupt practices.

Secondly, as a society to re­-awaken our consciences and listen to that voice within us which tells us that corruption is evil and abominable.

He has invited all the faithful and people of goodwill to externally commit by freely and sincerely append their signatures where and when needed, to fighting corruption and corrupt practices.

Bishop Anyolo has called the constant push by lawmakers for salary increment and allowances while millions of Kenyans are wallowing in poverty as a form of corruption. The huge wage bill and billions of loans that the government is borrowing is already enough reason for Kenyans to worry as we will be forced to pay for those loans for many years to come.

He has further questioned the government on what it is doing on making sure the culprits are prosecuted and jailed. He has also questioned the DPP, DCI, and EACC on why they are not able to process water tight cases and have the corrupt prosecuted.

In conclusion the bishop said that the only way to deal with corruption is to turn our backs against the corrupt practices and walk towards the path of integrity and justice. “The fight begins with each one of us, individually and collectively,” he said.