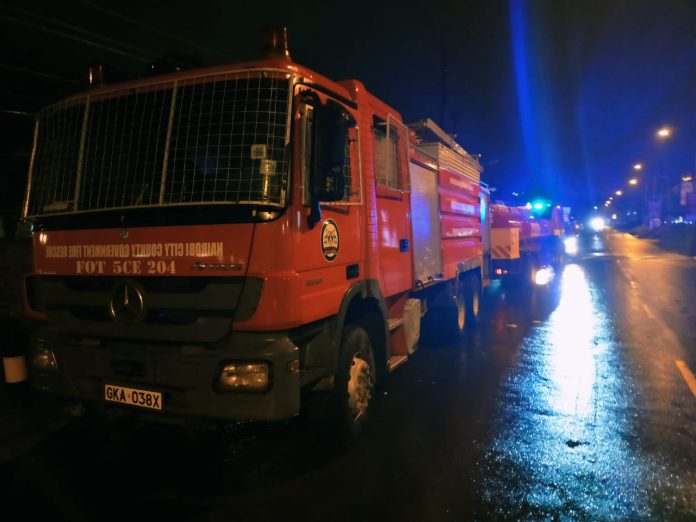 City Hall has deployed disaster management officers in all the 17 sub-counties in Nairobi.

This follows a warning from the weather man that the capital city is among the regions that will experience heavy downpour for the next one month.

Nairobi has experienced heavy rains for the last three days.

The meteorological department has predicted that the downpour will go on for the rest of the year.

From Friday, the county’s disaster management unit has been visiting areas affected by floods, to help unclog drainages and create outlets for flashfloods.

The Governor has affirmed that for the last two years, the county has invested a lot in disaster preparedness.

He also added that the monthly clean exercise, which was launched on July 7 last year, has contributed a lot in terms of mitigations.

“We have been unclogging drainage systems and setting up new ones in areas we are rehabilitating roads,” said Sonko.

He said more will be done to ensure Nairobi residents do not experience flash floods.

On Saturday night, the governor led the disaster management team to Aga Khan where there was temporary disruption occasioned by rain water spillage into a section of the hospital.

The hospital maintenance team together with the county’s disaster management team was able to drain the water and normal services resumed before midnight.

“We wish to thank the Governor of Nairobi, H. E. Mike Mbuvi Sonko and his team, our staff and the entire hospital leadership that moved in swiftly to ensure that there were no casualties and that all services were restored in the shortest time possible,” a statement from the hospital read.

The governor later at night toured Pumwani, South C, Eastleigh, among other CBD areas to inspect the roads and drainages.

The county boss noted that a number of county hospitals have been slightly affected by spillage of rain waters to some sections but the situation was contained by the disaster management team.

The Governor called on city residents to stop dumping waste in drainage systems that have been put up by the county.

“Most of the drainage systems are unclogged on a daily basis because some of us have decided not to be disciplined enough in waste disposal. We are throwing it anywhere and everywhere,” Sonko said.

The County Disaster Management and Co-ordination team led by its Chief Officer Ms. Anne Mwenda also visited some parts of Embakasi that had been affected by the floods.

The team flushed and unclogged the entire Transami Road which connects to the Catherine Ndereba Road in Kware Ward of Embakasi South Sub County.

Ms. Mwenda reminded the residents that Governor Sonko’s administration has heavily invested in the construction of roads in the area, hence it is their responsibility to ensure that the drainages are clean to avoid future flooding.

“It is your cardinal responsibility to keep your environment clean and habitable. I urge you to desist from throwing waste into the drainage systems to avoid a scenario like this,” the County Disaster Chief said.

She was accompanied by the County Chief Officer for Environment Halkano Waqo, the area MCA Rose Ogonda Kulla and Pipeline MCA Stephen.

Sonko issued an executive order to his executive members more so, disaster, roads, health, environment and water to work round the clock in order to avert any disaster.