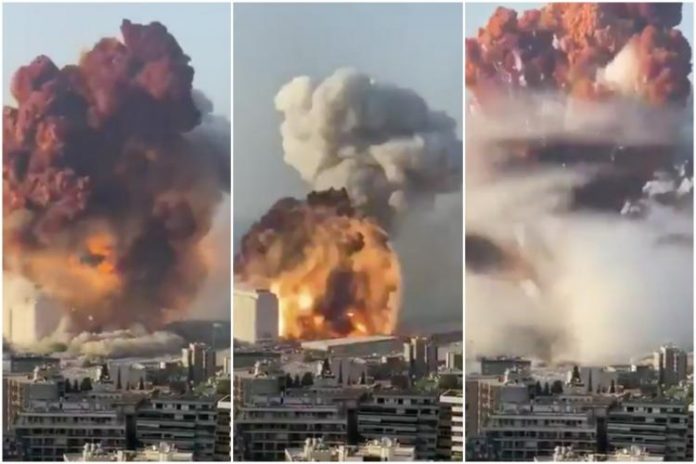 On August 4, 2020 Lebanon state capital, Beirut reported a huge explosion that sent shockwaves throughout the city, killing over 80 people – By Gerald Gekara.

The incident that was captured on camera by several Lebanese citizens, showed an apocalyptic explosion that authorities are yet to establish the cause.

There were conflicting reports, and it was initially blamed on a major fire at a fireworks godown near the port.

United States President Donald Trump spiked confusion when he referred to the incident as an “attack,”.

“Lebanese officials raised concerns with US diplomats about the use of the phrase “attack,” two State Department officials said.

However, US Defense Department was quick to correct the president, indicating that there was no indication it was an attack.

Later, early Wednesday, Prime Minister Hassan Diab said that about 2,750 metric tons of ammonium nitrate, a highly explosive material, had been stored at a port warehouse for the past six years “without preventive measures.”

Lebanon’s general security chief said a “highly explosive material” had been confiscated years earlier and stored in the warehouse, which is just a few minutes’ walk from Beirut’s shopping and nightlife districts.

Diab said that an investigation into the explosion was ongoing, saying the probe would include “revelations that will be announced about this dangerous warehouse which has been present since 2014.”

“I will not rest until we find those responsible for what happened, hold them accountable, and impose maximum punishment,” he said in a statement, saying it was “unacceptable” that so much ammonium nitrate had been stored “while endangering the safety of citizens.”

READ  Trump: You will never see me again if i lose to Biden

However, bomb experts say that the blast could have been caused by more than just ammonium nitrate.

According to the Lebanese government, at least 80 people were killed in the blast and at least 4,000 wounded.

“There are many people missing until now. People are asking the emergency department about their loved ones and it is difficult to search at night because there is no electricity. We are facing a real catastrophe and need time to assess the extent of damages,” Health Minister Hasan said in a Reuters report.

Among the dead is the secretary-general of the Kataeb political party, Nazar Najarian, according to Lebanon state-run NNA news.

He was in his office when the explosion happened and died after being critically injured.