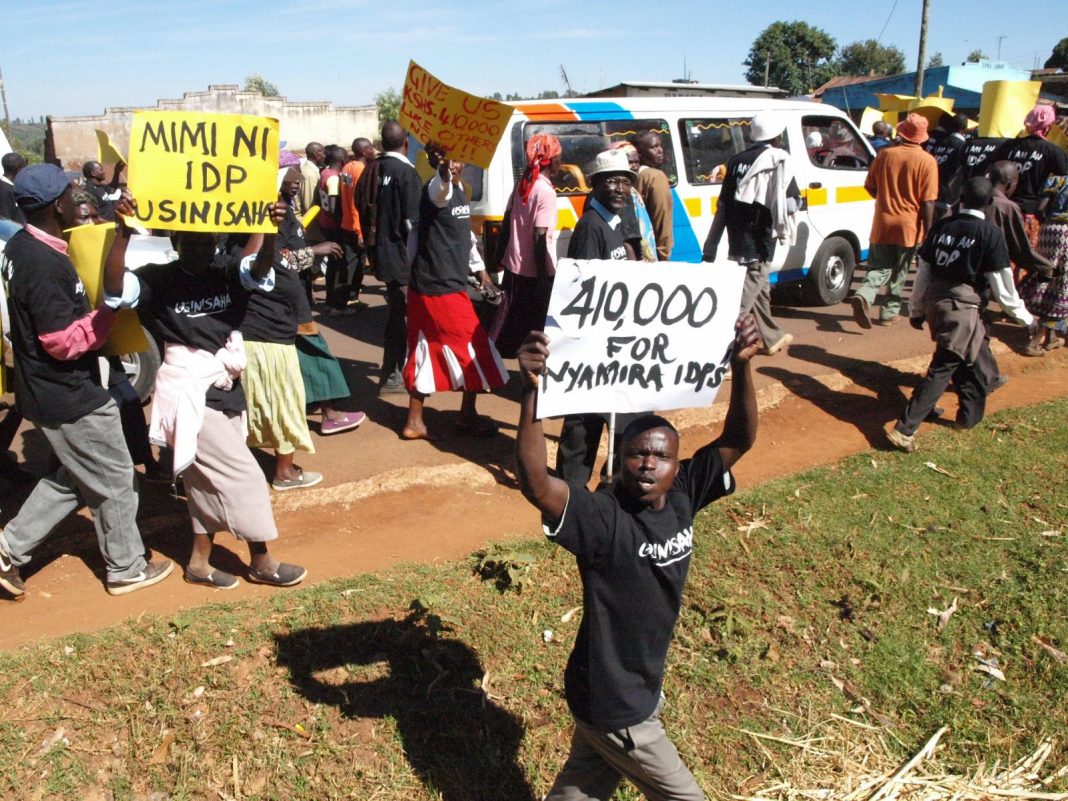 13 Years old cases against Nyamira IDPs may soon come to an End.

This is after Judge Lady Justice Hedwig Imbosa Ong’udi says she will deliver the judgement on notice early next year.

When the matter came for hearing Wednesday this week, Ong’undi asked the 7000 IDPs who says they were not compensated on the amount they are seeking.

The aggrieved IDPs led by Rev Nenwel Momanyi who are crying for justice, said they are seeking Sh 450,000 each from the state.

Momanyi says the matter has been pending in courts for 13 years and that he has been moving from one court to another to represent his people in vain.

In the petition, the IDPs have sued the County Commissioner Nyamira County, KCB bank manager Nyamira and James Evans who they said purports to be the IDPs chairman in that area.

The same Idps are having another suit in court against Interior CS Fred Matiang’i and PS Karanja Kibicho claiming that they have refused to compensate them.

In that case, the state is yet to respond. When that matter came for mention before Lady Justice Ong’udi, on Tuesday, October 12, 2021, she directed the state to put in their response by November 24, 2021, when the matter will be heard.

The IDPs were expecting the judgement because the matter had been handled in the absence of the state response by Judge Weldon Korir who is on transfer.

Momanyi said in the court papers that he has been moving from one court to another to represent his people in vain.

They have also attempted to present their petition to the Senate and National Assembly in vain.

“Instead of us, it was non-IDPs who were compensated and we travel from Kisii to Nairobi to listen to the case every time it is being heard,” Momanyi said.

“I believe that in the 13 years we have been in court, we are going to get justice,” Momanyi said.

He pleaded with the Ethics and Anti-Corruption Commission (EACC), Kenya National Commission on Human Rights (KNCHR) and the Directorate of Criminal Investigations (DCI) to follow up on the matter.

They are seeking to have those who illegally received the money arrested and prosecuted. They said the money was paid to Boda Boda riders and other non-IDPs.

In June 2017, President Uhuru Kenyatta released Ksh 358 million for the compensation of IDPs in Kisii County.

The President later handed over another Ksh 472 million to displaced people in Nyamira.

Uhuru said the beneficiaries were the last batch of people displaced by the violence. They are now confident that they will attain justice soon.

*This article was written by Meshack Makau for Uzalendo News.  Email: uzalendonews24@gmail.com to submit your story.