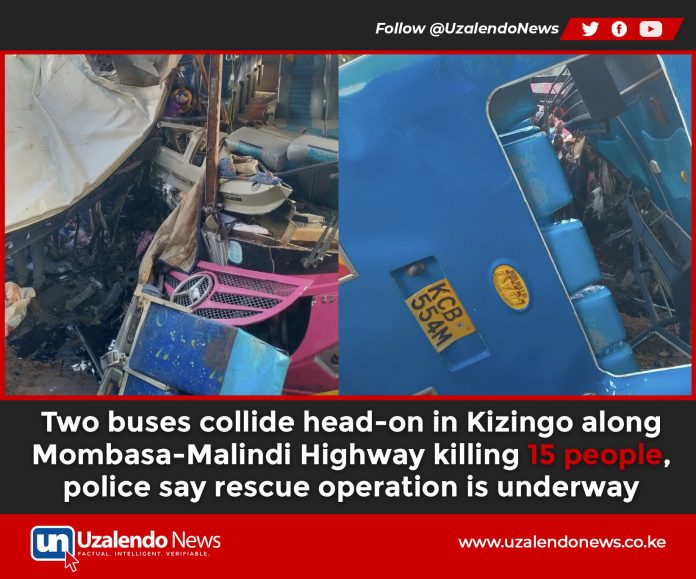 Kilifi County was on Wednesday thrown into mourning following a grisly accident that has so far claimed more than 16 lives.

It is expected that the number of deaths might increase after many of them got serious injuries from that accident.

The accident happened in the wee hours of the morning when a Garrisa bound bus christen ‘Mushin Express’ collided head on with a Mini-matatu shuttle that was ferrying people from Marereni in Magarini to Mombasa.

The bus was heading towards Lamu side when the crash occurred.

“So far 14 people have been confirmed dead with 15 others seriously injured in the accident. Most of them are receiving treatment in Malindi hospital and in other private health facilities within Malindi town,” said Mr Olaka

Kilifi Governor Amason Kingi condoled with the families of the victims and called for more tolerance and adherence to driving and traffic rules while on the road.

“I am greatly saddened by the loss of lives of a number of travellers in an accident involving two buses at Kwa Mkikuyu, Msabaha, this morning. It is regrettable that accidents have continued to claim precious lives on our roads despite persistent calls to motorists to strictly adhere to traffic regulations to avoid such tragic outcomes. We wish a quick recovery to those injured and may the departed souls rest in peace,” the governor said in his twitter handle.

Kilifi residents were still in shock when photos of mutilated bodies were strewn all over social sites included whattasup and facebook in the region.

The accident happened in an area that police have named it as a black spot and a lot of accidents have happened along that stretch line.