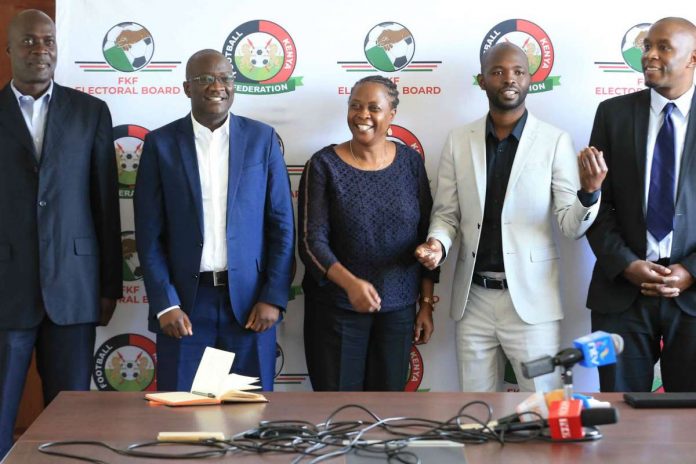 Sports Registrar calls for postponement of FKF polls ‘until they put house in order’. Uncertainty surrounds the Football Kenya (FKF) elections set for Saturday after the Sports Registrar Rose Wasike called for its postponement over glaring anomalies during the county and branch exercises held on September 19.

In a letter seen by Uzalendo News, that was addressed to FKF Chief Executive Officer Barry Otieno and signed by Wasike and also copied to Sports Cabinet Secretary Amina Mohammed and Deputy Sports Commissioner officer, strongly indicated that the national polls might not be held.

In an incriminating letter addressed to Otieno, a large chunk of the irregularities is the federation’s failure to comply with the 2013 Sports Act including registration of branches. Apparently, most of the counties that participated in the county elections were not registered with the Registrar pointing it as much, besides FKF giving a wrong date of the conclusion of the exercise.
“Most of the counties that participated in the elections are said to have not been registered by my office by 19th September, 2020 therefore flouting section 46 (1) of the Sports Act (revised) edition which states that a body shall not operate as a sports organization unless its registered under the Act,” read the letter.

The Registrar’s letter further said FKF used illegal entities in the process following complaints from various football county sports organizations. “I have received complaints through letters and calls that FKF used unregistered entities that it has never registered.

Further, some of the officials that appeared in various counties as having vied for positions were nominated in their absence,” she said. The federation might find itself in more trouble after failing to indicate the Premier League clubs that were set to vote in the national elections tomorrow.

“Your letter failed to indicate the Premier League and Super League clubs or any other sport that will vote on 17th October. I’m therefore not able to check their legal status,” Wasike said. FKF has also been faulted by the Registrar for failing to attach integrity certificates for candidates nominated to vie for various positions, their details as well as county sports Clubs that will vote together with their names of voters.

“In view of the above, It would have been prudent for the federation not to proceed with the planned elections to allow it to put its house in order and conform to the national laws of the country and Fifa statutes before proceeding with the elections,” said the Registrar.