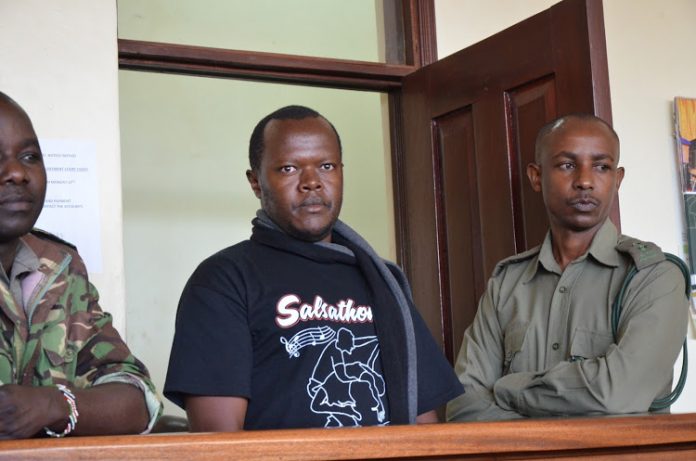 Former Kenya Defence Forces (KDF) officer Major Peter Mugure who is facing charges of killing his wife, daughter and son yesterday asked Nyeri court to allow him to represent himself in the triple murder case. – By John Mutiso.

Mugure who appeared before Magistrate Florence Muchemi is facing three charges of murder in the killing of his ex-wife Joyce Syombua, 31 and her 10-year-old daughter Shanice Mugure Mwaura and son Peter Mwaura Junior aged 5.

Mugure who appeared before the court virtually is said to have committed the offence jointly with others who were not before the court on October 26, 2019 at Laikipia Airbase in Nanyuki town.

Since his arrest on November 2019, he has been represented by three lawyers namely Cliff Ombeta, Kimani Njuguna and later Kariuki Runo. He however now wants no lawyer to represent him but instead sought to stand-in for himself.

Mugure also made a second application where he asked the court to allow him get back his motor vehicle and some personal items such as ATM cards and clothes which were confiscated by police.

“They took away a number of personal items including my ATM cards. I’m asking to have them returned to me because I do not think they are part of evidence,” Major Mugure told the court.

Syombua had been reported missing on October 25, 2019 after visiting the then army officer in Nanyuki. Mugure had previously been ordered by a court of law to pay maintenance costs for his children after DNA tests were carried out to prove paternity.

The bodies of the deceased were discovered buried in a shallow grave at Kilimo in Thingithu a few days after they were reported missing after they had visited the soldier at his workplace.