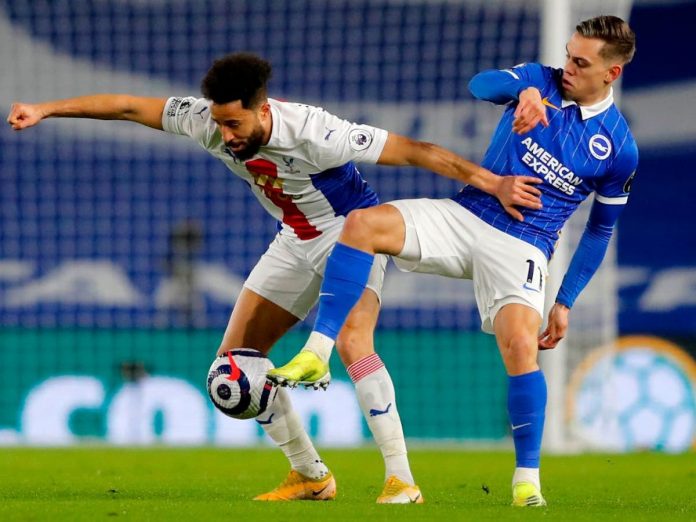 Palace’s two goals came from their only two shots on target and touches in the Brighton box in the whole game, with Benteke steering Andros Townsend’s cross back across goal and beyond Robert Sanchez deep into second-half injury time to nick three points.

Crystal Palace had three shots, and took home three points. Brighton had 25 shots, dominated the game but somehow did not manage to win or even draw.

The visitors had spent most of the game defending, and looked like they would be forced to settle for just a point through Joel Veltman’s 55th-minute goal.

Palace were dominated for 94 minutes, outclassed and outpassed. Benteke’s was a strike of real quality, was entirely out of keeping with the rest of their performance on a night when they lacked attacking invention or goalscoring threat in the absence of Wilfried Zaha.

“The Premier League can kill you, as it feels like it has tonight,” said Potter, still coming to terms with what had happened against his team’s fiercest rivals. “We are human beings. We are hurting. It is not very pleasant.”

For Palace, to have nicked one goal was surprising enough, given their approach to the game. But to steal two, and to win it with the last kick of the match, was worth a celebration in south London.

“The game is not about touches in the opposition box,” said Hodgson. “The statistic that counts is goals against and goals scored. I am not going to apologise for coming away with what we consider to be a very good victory.”

It all felt so familiar for Brighton, who have missed out on so many results this season because of their inability to finish the chances they create.

Leandro Trossard, Neal Maupay, Pascal Gross, Danny Welbeck and Adam Lallana are all fine players, but none of them have shown the ruthless edge that Brighton need to produce.

But thanks to Benteke’s last-minute heroics, Palace move above Southampton into 13th, with 32 points, while Brighton remain in 16th, four above the relegation zone.