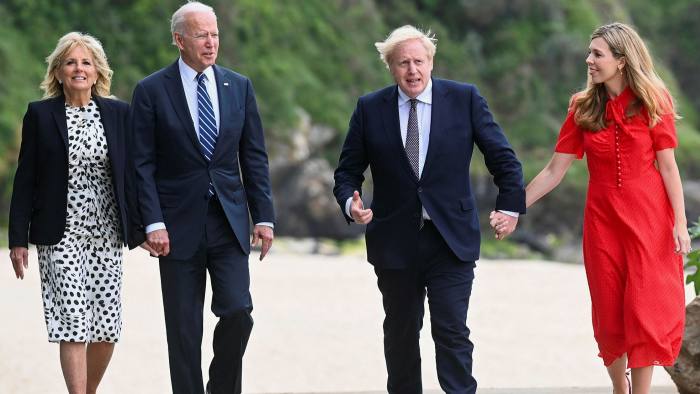 G7 leaders are to commit to using all their resources in an effort to ensure the devastation caused by a pandemic like Covid-19 is never repeated.

On the second day of their summit in Cornwall, they will issue a declaration that sets out a series of measures intended to achieve this.

The aim is to slash the time needed to develop vaccines to under 100 days.

Mr Johnson, who is hosting the three-day gathering at the Cornish seaside resort of Carbis Bay, said it was vital to learn from the “mistakes” of the 2008 financial crisis and tackle the “scar” of inequality.

After Friday’s talks, the leaders were joined by the Queen for a dinner at the nearby Eden Project.

As they posed for a group photo, the monarch was heard to joke: “Are you supposed to be looking as if you’re enjoying yourself?”

The leaders around the Queen laughed, and Mr Johnson replied emphatically: “Yes.” The prime minister added: “We have been enjoying ourselves – in spite of appearances.”

The G7 (Group of Seven) is an organisation made up of the world’s seven largest so-called advanced economies: Canada, France, Germany, Japan, Italy, the UK and the US.

The G7 leaders will issue the Carbis Bay Declaration after a special session on Saturday, which will set out a plan to try to prevent any repeat of the human and economic devastation wreaked by Covid-19.

Globally, more than 175 million people have had the infection since the outbreak began, with over 3.7 million Covid-related deaths, according to America’s Johns Hopkins university.

The G7 declaration will spell out a series of concrete steps, including:

Before the talks, Mr Johnson said: “In the last year the world has developed several effective coronavirus vaccines, licensed and manufactured them at pace and is now getting them into the arms of the people who need them.

“But to truly defeat coronavirus and recover we need to prevent a pandemic like this from ever happening again. That means learning lessons from the last 18 months and doing it differently next time around.”

The declaration is expected to incorporate recommendations from a report by a group of international experts drawn from across industry, government and scientific institutions.

Mr Johnson has pledged the UK will donate more than 100 million Covid vaccines to poorer countries within the next year, while Mr Biden promised 500 million doses of Pfizer vaccines to 92 low and middle-income countries and the African Union.

But some charities and campaigners have criticised the scale of the UK’s plan, under which 5 million doses will be given out by the end of September, with 25 million by the end of 2021 and the rest provided during 2022.

Lis Wallace, head of UK advocacy at anti-poverty campaigners One, said it was “not happening anywhere near fast enough”, and called on Mr Johnson to start sharing doses straight away.

And US pop star Selena Gomez told her nearly 65 million Twitter followers that the promise to deliver five million vaccines by the end of September was “too little too late”.

Ms Gomez was among a number of celebrities who took part in a concert aimed at increasing access to Covid vaccines in April. Mr Biden also appeared at the event, as did Prince Harry and Meghan Markle.

The G7 nations are expected to collectively agree to provide a billion doses of Covid-19 vaccine in an effort to end the pandemic in 2022.

The World Health Organization estimates 11 billion doses will be needed to vaccinate the whole world to a level of 70%, the point at which transmission of the virus could be significantly affected.