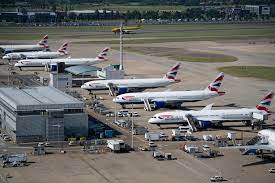 London’s Heathrow airport, which is suffering from flight delays and caps on passengers owing to staff shortages, faces further disruption as refuellers strike later this week, a union announced Tuesday.

Workers employed by Aviation Fuel Services plan to strike from early Thursday through to early Sunday, trade union Unite said in a statement.

Unite said AFS was responsible for refuelling half of the non-British Airways traffic at Heathrow.

“This is yet another example of energy companies boosting profits at the expense of workers.”

News of the strike comes as official data Tuesday showed UK wages being eroded at a record pace because of decades-high inflation.

Unite said AFS staff had rejected a pay increase of 10 percent, with British annual inflation set to top that amount this year on soaring energy and food prices.

Government Shuts down The Nairobi Expressway