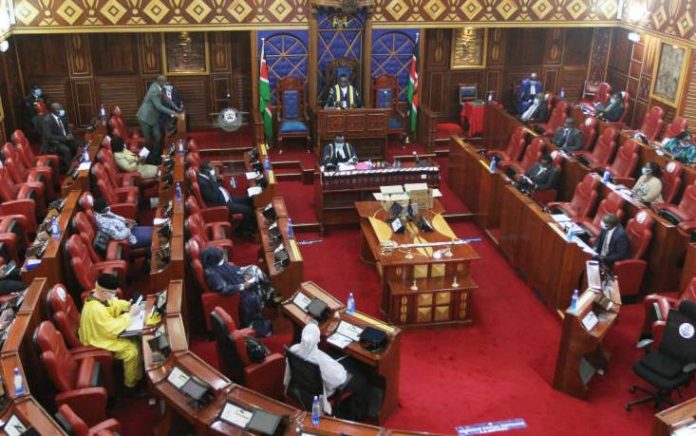 The senate committee that was mandated to break the revenue allocation formulae to counties has finally agreed on a win-win formulae.

Bungoma senator said the stalemate which ‘has been on the media and everybody’s lips’ is going to end.

“We have had in-depth long winding deliberations trying to give the country a formula of sharing revenue among counties,” Wetang’ula said.

The senate last week resolved to form the 12-man committee after ruthless back and forth debate that had the house adjourned 9 times without a break through.

The Senate one man one-shilling formula pushed by government against the team Kenya, pushing for marginalization and geographical land mass to count.

On Wednesday in a press briefing at the committee exuded confidence in the breakthrough as they prepared to hand over the report to the speaker on Thursday.

We will not and we are not allowed by standing orders of the house to divulge the contents of the report until it is presented to the speaker and it finds its way to the house,” committee co-chair Moses Wetang’ula (Bungoma) said.

In a rejoinder Nairobi senator co. chair said “We have looked at all the options that we have had before us and all of those that were proposed by our colleagues and ourselves. And we are confident to say when we look at each other as one indivisible country, then a solution is nigh,” Sakaja said.

The report could not immediately be made public as the Senate standing orders bar committees from making their recommendations public until they are availed to the Senate leadership.

The push and pull in senate led to the government trying to implore dirty tricks in arresting three senators, kakamega cleophas Malala, Bomet Dr Lang’at and Samburu Lelengwe on a voting day in parliament.

The Majority and Minority Leaders had indicated they were willing to back the formula that would emerge from the special leaders.

Once the house leadership endorses the committee’s report, the speaker shall gazette a special sitting of the Senate next week to approve the formula.

The passage of the formula will unlock the passage of County Allocation of Revenue Bill (CARA) that splits among counties the Sh316.5 billion set aside for them in the budget.

Failure to pass CARA has placed the counties in a quagmire as they were unable to access money from the Treasury.

The breakthrough will be a reprieve to counties which seems to be stalling operations with notices of strikes from county stuffs, a notion that senators have opposed