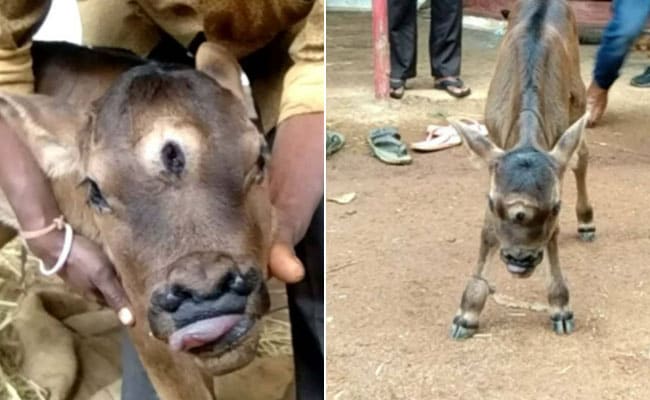 A three-eyed cow born in India has been branded a “divine miracle” and villagers have been queuing up to worship it.

The animal is alleged to be a reincarnation of Hindu God Shiva.

The unusual calf was born with four nostrils and an extra eye on its forehead.

Some people of the Rajnandgaon District of India’s Chhattisgarh hamlet believe the three-eyed calf is a reincarnation of Viswanatha, a God who is noted for having an eye on his forehead.

According to Sputnik, a big number of people came from adjacent villages to worship the cow, believing it to be Shiva’s rebirth.

The calf, which was born on January 14, drew big crowds who brought incense sticks, coconuts, and money, as is customary in the area.

Some believe the calf’s birth, which occurred precisely as the Hindu harvest festival, Makar Sankranti, began, was no coincidence.

Villager Neelkumar Verma told the Indian news agency ANI: “I’ve never seen a creature with three eyes. Lord Shiva was the only one who had it. It’s a supernatural occurrence. The Lord himself manifested as a human being.”

The analogy has been disputed by a veterinary doctor.

According to Dr. Kamlesh Chaudhary, such occurrences arise as a result of the embryo’s aberrant growth.