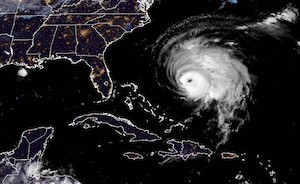 Hurricane Fiona, the first major hurricane of the 2022 season, battered Puerto Rico with catastrophic flooding rains and strong to damaging winds, severing power to the entire territory before hitting the Dominican Republic and sideswiping the Turks and Caicos.

Commodore Joan Conover, President of the Seven Seas Cruising Association (SSCA), told Noonsite that she is receiving reports of damage and devastation to some of the most popular cruising areas in the Caribbean, while other areas have escaped relatively undamaged.

“Denise Simpson our SSCA host in Luperon, Dominican Republic, reported that Luperon west and Ocean World were relatively unscathed, but Samana town was badly damaged with many boats sunk,” Joan told Noonsite.  “We think boats that went to the Los Haitias area on the south side of the bay up into the mangroves were fine.

“Ocean World Marina has also reported no damage to the marina or any hauled out boats, but they experienced 18 ft seas and 50Kt winds steady so did well under the circumstances. They kept staff on task working the areas where the boats were hauled out, and at the marina to make sure all was secure.

“Dario, SSCA’s Puerto Rico host in Puerto Real rode out the hurricane in his boat in the harbor at anchor, but reported that on land many roads were damaged and power was out.

“In Salianas, Puerto Rico, boats tied up in the mangroves were OK but there was lots of flooding on the south side of the island with more than 30 inches of rainfall.

“Prior to Hurricane Fiona hitting Puerto Rico, the US declared a federal emergency so Puerto Rico now has a significant number of support people on the ground. Power is slowly being restored, but there are huge water issues, not just with flooding but with drinking water as well.”

Joan told Noonsite that communications in Puerto Rico are also an issue with many cell towers out of action and limited or no internet connections. SSB radio may well be a good way to get messages through and any yachts planning to go to those Caribbean areas affected by Hurricane Fiona should have Iridium Go or some sort of satellite communications on board.