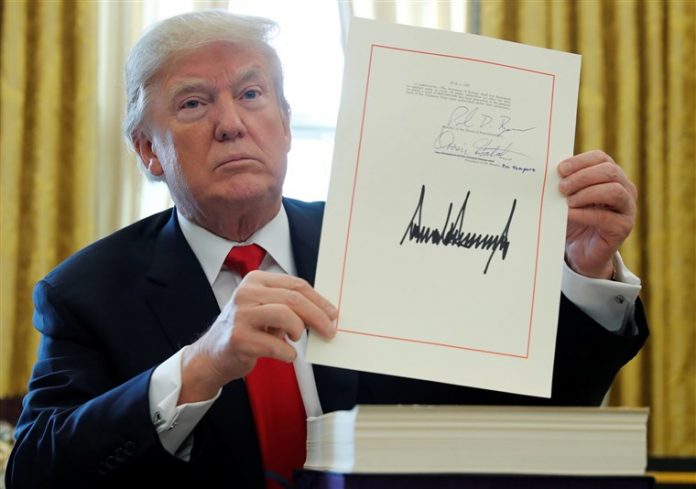 President Donald Trump has signed a $900 billion pandemic relief package, ending days of drama over his refusal to accept the bipartisan deal that will deliver long-sought cash to businesses and individuals and avert a federal government shutdown.

The massive bill includes $1.4 trillion to fund government agencies through September and contains other end-of-session priorities such as an increase in food stamp benefits.

The signing Sunday, at his private club in Florida came amid escalating criticism over his eleventh-hour demands for larger, $2,000 relief checks and scaled-back spending even though the bill had already passed the House and Senate by wide margins. The bill was passed with what lawmakers had thought was Trump’s blessing, and after months of negotiations with his administration.

His foot-dragging resulted in a lapse in unemployment benefits for millions struggling to make ends meet and threatened a government shutdown in the midst of a pandemic.. But signing the bill into law prevents another crisis of Trump’s own creation and ends a standoff with his own party during the final days of his administration.

It was unclear what, if anything, Trump accomplished with his delay, beyond angering all sides and empowering Democrats to continue their push for higher relief checks, which his own party opposes.

In his statement, Trump repeated his frustrations with the COVID-19 relief bill for providing only $600 checks to most Americans instead of the $2,000 that his fellow Republicans already rejected. He also complained about what he considered unnecessary spending by the government at large.

“I will sign the Omnibus and Covid package with a strong message that makes clear to Congress that wasteful items need to be removed,” Trump said in the statement.

While the president insisted he would send Congress “a redlined version” with items to be removed under the rescission process, those are merely suggestions to Congress. The bill, as signed, would not necessarily be changed.

Democrats, who have the majority in the House, immediately vowed to prevent any cuts. Democrats “will reject any rescissions” submitted by the president, said Appropriations Committee Chairwoman Nita Lowey, D-N.Y. , in a statement.

Lawmakers now have breathing room to continue debating whether the relief checks should be as large as the president has demanded. The Democratic-led House supports the larger checks and is set to vote on the issue Monday, but it’s expected to be ignored by the Republican-held Senate where spending faces opposition. For now, the administration can only begin work sending out the $600 payments.