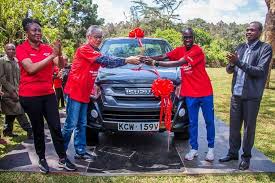 Eliud kipchoge is now the new owner of an Isuzu Cabin worth sh.4.1million, a promise he had been given by Isuzu East Africa after winning the Ineos 159 challenge.

Isuzu East Africa chairman Eisaku Akazawa presented the vehicle to him at Karura Forest in a colorful event where he was accompanied by his lovely family and 200 more participants who ran a 4km race at the forest before the ceremony.

The vehicle’s number plate, KCW 159V, was quite symbolic with the numbers and letter “159V” stating his achievement of 1:59 and V the venue that was Vienna.