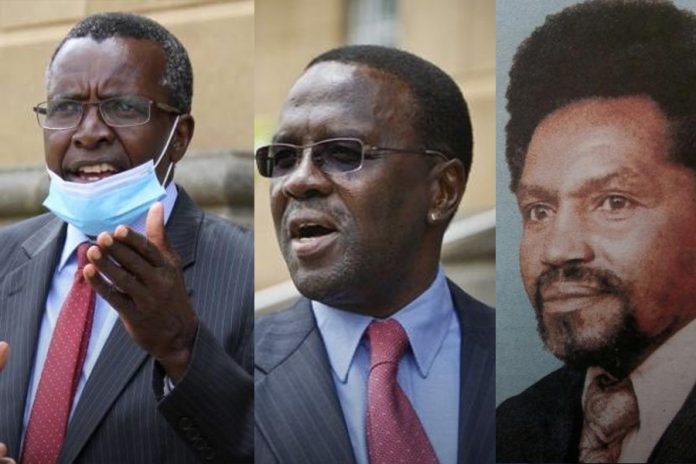 Kenya has had its fair share of controversial Chief Justice office holders. – By Gerald Gekara.

The office, complete with its symbolic wig has through history been subject to political meddling, regarded as pawns to thwart political opponents ‘legally’.

Maluki Kitili Mwendwa was the first elected African Chief Justice holder of the position. He served from 1968-1971.

He was sacked by President Jomo Kenyatta after he plotted to overthrow the Government of Kenya.

Then there was Justice Bernard Chunga. The academic dwarf rewarded by President Daniel Arap Moi for prosecuting the likes of Raila Odinga, Mukaru Nganga, John Khaminwa at night.

Chunga resigned at the start of President Mwai Kibaki’s reign amid investigtions into his misconduct.

President Kibaki then appointed Justice Evans Gicheru to deal with his enemies.

Gicheru abrogated his position to the then Justice Minister Kiraitu Murungi.

The duo orchestrated a self-defeating purge on judges to create positions for activists.

Then in the wake of a new constitution in 2010, a brand new ‘bling bling’ judge, Justice William Munyoki Mutunga was appointed at the helm of the Judiciary.

Though Mutunga is heavily praised for his role in democracy and championing against the repressive Moi government, wearing of a single earring, turned the spotlight on his sexuality and spirituality.

He quickly dismissed the allegations that he was gay and spat at politicians such as then Eldoret North MP William Ruto for questioning his beliefs.

He became the subject of scorn for allegedly protecting the undoings of the election authority, IEBC.

Justice Maraga is the Church elder who refused to work on Sabbath day, because the Church Law must be obeyed.

Though he is set to retire in 90 days time, Maraga had to break another record.

By sending MPs home for failure to impliment the two-thirds gender rule.

His role in nullifying an incumbent’s election, is the very first in African political history.

But Uhuru punched his way back to power through a well orchestrated political force.

First by threatening Maraga himself with a revisit to the Judiciary. And then aligning Mps to branx his NASA, with the mugshots of Raila and Kalonzo as the logo.

Uhuru did revisit. By refusing to appoint judges vetted by Maraga. And through intermitted rationing of cash support to the courts.

Maraga, a true Omugusii warrior bid his time…and has now revisited too.

He enjoys security of tenure and life long pension. He is untouchable. And unbwogable.