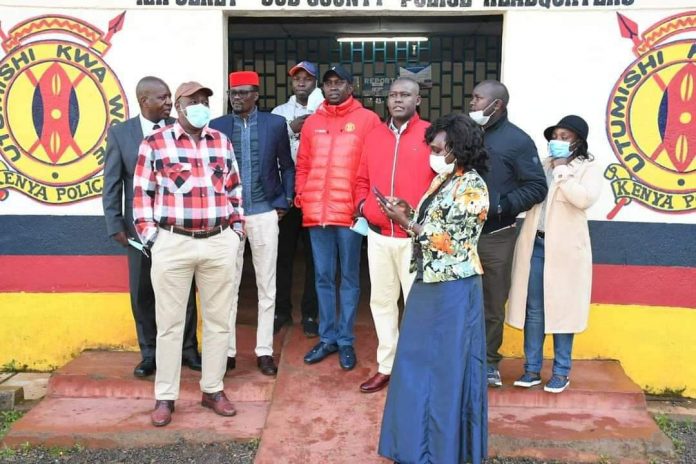 Kapsaret Member of Parliament Oscar Sudi has been arrested after presenting himself at Langas police station. He has been flown to Nakuru – By Gerald Gekara.

According to reports, the vocal legislator will be facing incitement to violence, and hate speech charges.

Oscar Sudi has been the center of numerous protests and calls for an apology after an alleged slur against President Uhuru Kenyatta and his mother Mama Ngina Kenyatta.

Upon requests to apologize to the head of state, Oscar Sudi dared his party leader President Uhuru, to apologize on his behalf, slamming the ODM party for condemning his action.

This resulted in a group of Police officers laying siege at the legislator’s home in attempts to arrest him.

“It pains me to realize The Constitution Kenyans fought for is Dead. Right now there are 3 truckloads of police at Kapseret center&more police surrounding Hon Sudi’s homestead at Kapseret, Uasin Gishu County. WHY arrest him at night? He was available in broad daylight earlier today.” Hon. Gladys Boss Shollei, Women rep. Uasin Gishu county

READ  Western by pass project is now 40 per cent complete

Kudos to KeNHA; Read this touching story of a friend of mine: