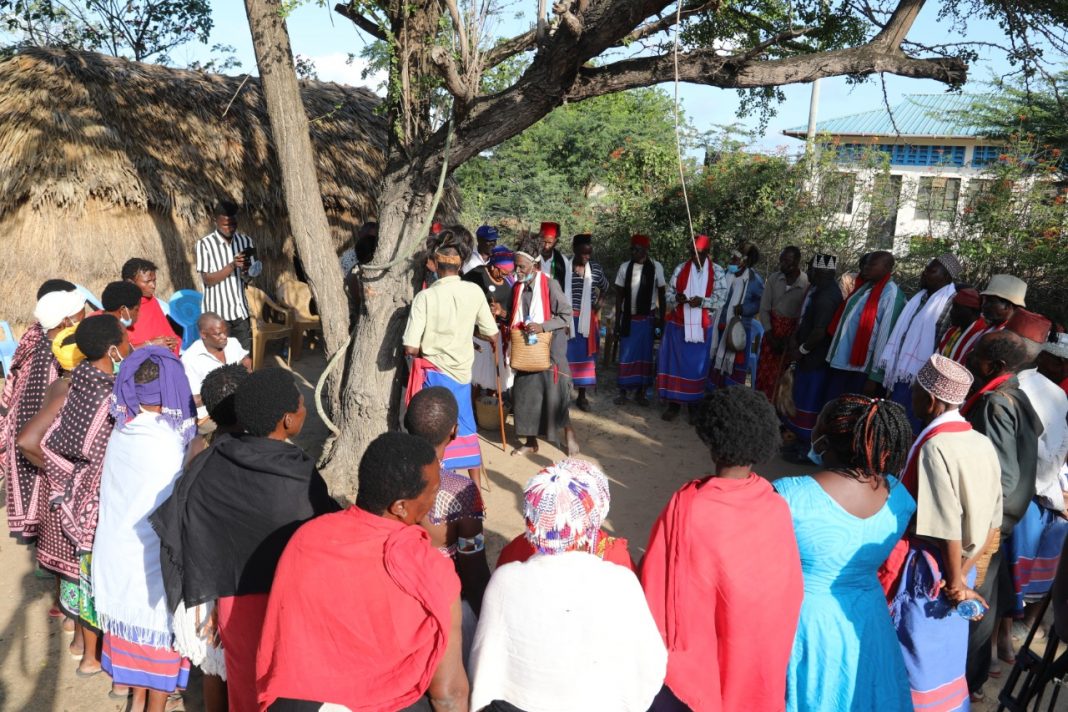 The Elusive Coast unity that has played itself open whenever elections beckon has now caught the eyes of the elders.

The Mijikenda kaya elders are now on a mission to make this a success story after years of discouragement from political leaders.

The worry of the elders is that the division among the coastal political leadership is increasingly affecting their social and economic development of the region. It has total derailed any form of development.

Already the elders drawn from the nine Kayas of the Mijikenda have met several times to put their house in order and prevent ‘fake’ Kaya elders from being used to endorse politicians.

They were very categorical that no other Kaya elders shall be recognized for blessings apart from those that are identified by the Mijikenda Kaya elders.

Tsuma Nzai Kombe the chief coordinator of Mijikenda kaya elders said they have had a series of prayers in different Kayas to bring together all the elders.

Speaking at Magarini cultural center during the climax of their prayers he said the aim of the traditional prayers was to seek unity and set up a political stand for the region.

He challenged political leaders from Coast to engage Kaya elders because the region is greatly divided politically.

“If the leaders won’t recognize elders a time will come when they will remember that there are elders to be respected because today’s prayers were aimed at uniting the Mijikenda and up to now things have changed,” he said.

Mr Nzai said the leaders in power should ensure they respect the Kaya elders as it is the only way that will save the lives of Mijikenda.

Normally the traditional prayers he said are conducted under a tree and then rituals are conducted to appease the ancestors and God to get blessings.

According to Mr Hamisi Mwavigo who is the secretary of Mijikenda Kaya elder’s association, their aim is to ensure they forge unity of the coastal region including those who are not Mijikenda.

He said they prayed to God to end the Covid-19 pandemic, so that the country can be at peace and also to ensure that culture and traditions are preserved.

“The aim of the elders is to ensure we defend the resources for the region, it is sad that a costal person is regarded as a squatter in their own ancestral land,” he said.

He said they want to safeguard and reclaim all Kayas which were grabbed by greedy individuals who took advantage of the fact that the sacred places have no land ownership documents.

Kenga Mbeo a Kaya elder from Kaya Ribe said unity of coast region was key in promoting development and get blessings from the ancestors.

Ms Naomi Cidi Kumbatha a women leader from the Coast who has been in the forefront in championing for unity of the region said for a long time the region has been divided a recipe she said for the decision of coast leaders to abandon the Kaya elders.

She said the Kaya elders have been sidelined and left to suffer and some people who do not deserve to be Kaya elders are given a chance to conduct rituals against the traditions and annoying the ancestors.

“We have our cultures but most of the time we abandon them, first we came up with plan to bring all Kayas together which we did on March 23 at Kaya Fungo where we went prayed and asked for forgiveness from ancestors and God,” she said.

She said their unity aims at bringing leaders who will recognize the Kaya elders during the oncoming elections and even after they are elected into office.

Kalama Mtengo a youth leader called on coast leaders in the six counties to unite so as to save the region from the problems it’s facing.

Currently he said coast has never had an opportunity to produce a president or deputy since independence because of the political divisions.