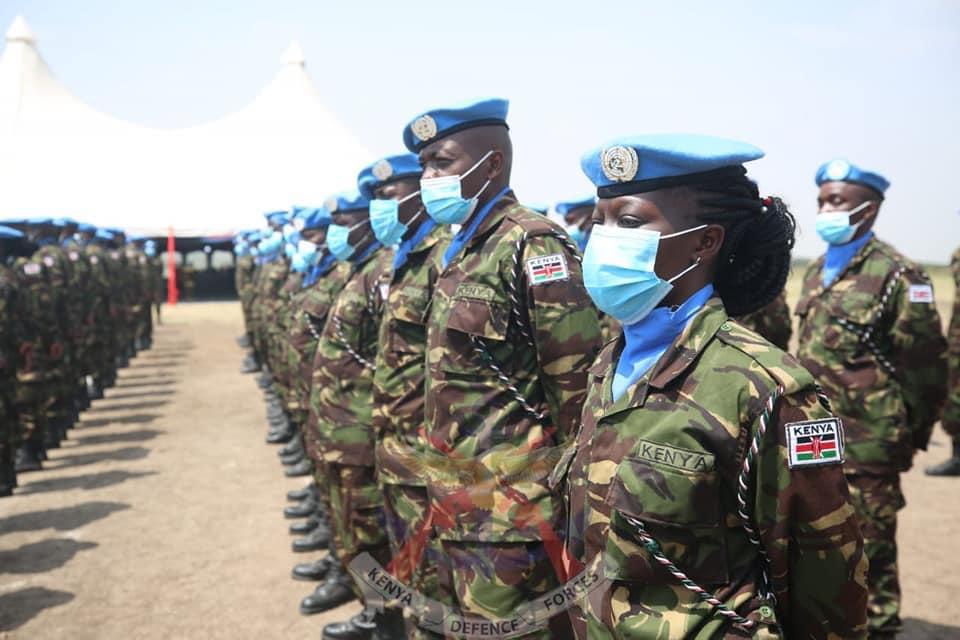 The Chief of Defence Forces (CDF) General Robert Kibochi handed over the Kenyan flag to the Quick Reaction Force (QRF) proceeding to the United Nation Organisation Stabilization Mission in the Democratic Republic of Congo (MONUSCO) at Embakasi Garrison.

In his address, the CDF congratulated the troops for being selected to represent the country in Congo and reminded them of the need to uphold highest standards of discipine as per the UN code of conduct.

“I have no worries and I believe you are ready for the mission now that I saw you train in Mt. Kenya. I believe you are mission ready to protect the people of Congo. You are leaving here for Congo to represent the country that’s why we are handing over the Kenyan Flag to you, and you will hand back when the mission is done,” said the CDF.

He said that Kenya’s good record in peace keeping missions is known globally and urged the troops to raise the standards to keep up with the character of KDF which is, of a professional and mission ready Force. The forces will be operating at Mavivi in Beni Eastern Congo.

The CDF urged the troops to cultivate good relations with the people of Congo and contigents operating in the area namely from; Nepal, South Africa and Tanzania.

Commander Kenya Army Commander Lieutenant General Walter Koipaton assured the CDF that the QRF team is mission ready and capable to execute the MONUSCO tasks as specified in the mandate. He also noted that the QRF had requisite training and had satisfactorily met the requirements by KDF and the UN in preparation to the deployment.

“This is an important occassion as it marks our proud re-entry to the UN Peace Keeping Missions after a long duration. The team is well trained, well prepared and mission ready for deployment,” said the Commander Kenya Army.

He said that he has no doubt that the team will fullfill its obligation as guided by the mission’s objectives and mandate. The team has acquired all the support they require for mission accomplishment,” Lt. Gen. Koipaton affirmed.