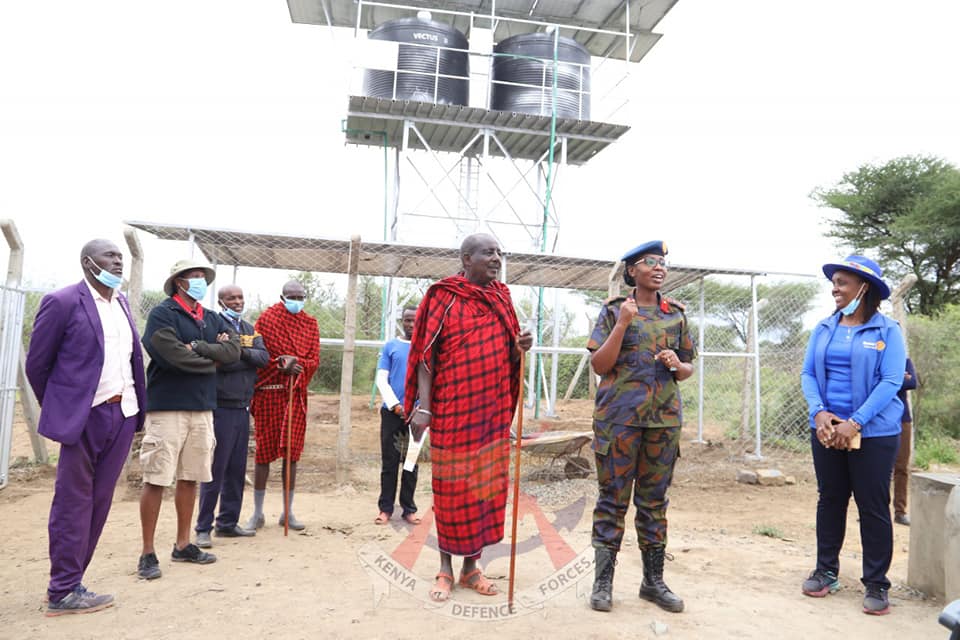 The finished Oloomaiyana Water Project has been handed over to the Oloomaiyana community in Kajiado County by the Kenya Defence Forces in collaboration with the Rotary Club of Nairobi – Lang’ata.

Prior to this incident, the residents of Oloomaiyana would go at least fifteen kilometers every day to gather water for their animals and personal.

The Rotary Club sent a request to KDF on behalf of the community, requesting assistance in providing clean and drinkable water.
Colonel Zipporah Kioko, the KDF spokesman, spoke on behalf of the Chief of the Defence Forces, General Robert Kibochi.

‘While the mandate of the Defence Forces is to defend and protect the sovereignty and territorial integrity of the Republic of Kenya, we are also mission ready to assist other authorities in situations of emergency and disaster. In addition to this KDF also participates in humanitarian civic activities to improve the lives of Kenyans.”

In the case of the Oloomaiyana water project, “providing a population of more than 1,200 with access to clean and safe water for drinking, cooking, cleaning and for their livestock was a compelling request” – she added.

KDF sunk a 280 meters deep borehole with a yield of 7,200 cubic Litres per hour, and equipped it with; a submersible water pump, solar power, and constructed an elevated water tank tower hoisting two water tanks of 10,000 Litres each. The water was also reticulated 4km to the Oloomaiyana Centre water kiosks and adjacent facilities such as the Early Childhood Education Centre and the local dispensary.

“Provision of safe, clean water will uphold the dignity of the community in accessing life’s most valuable resource,” noted Col. Zipporah.

Rotary Club President, Ms. Sarah Migwi, told of how the club first paid visit to the rural community after fellow Rotarian and Oloomaiyani son, Mr Tony Tukai informed them of his people’s plight.

“What hit us most was their lack of access to clean, non-contaminated water.” Ms. Mwigi said.

It was then that she and the Rotary Club committee representatives sought an audience with the CDF Gen Kibochi and requested for KDF’s assistance.

The area’s chief, Mr. David Samperu, expressed his gratitude and commended the KDF for their role in providing a safer and sustainable source of water for the community.