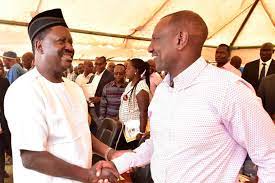 Deputy President William Ruto has offered to dialogue with Raila Odinga to cool political temperatures after the Tuesday 9th vote.

Speaking at Nyayo stadium during the last Kenya Kwanza Rally, Ruto said the meeting in necessary to chart a way forward for Kenya.
“I will host Mr. Kitendawili for a cup of tea after the elections because we are all Kenyans.”

However, the Kenya Kwanza flag bearer said he will not form a coalition Government with Raila if he wins, and that the Azimio leader will serve his official opposition role.

“What I will not do is to go through what Kenyans have been taken through in the last 5 years. A country whose government and opposition are on the same side.”

DP Ruto said he will build on the success of President Kenyatta projects, departing from his hardline stance adopted during the electioneering period.

Ruto added he will protect Kenyatta in his retirement, but will empower the police and Judiciary to pursue and jail criminals.

He however hinted at prosecuting President Kenyatta’s relatives, who he claimed looted KEMSA.

Dr. Ruto is the first Deputy President under the 2010 constitution. He fell out with President Kenyatta after the handshake, necessitating a bitter row.

Political temperatures are likely to go down after the close of the campaign period.