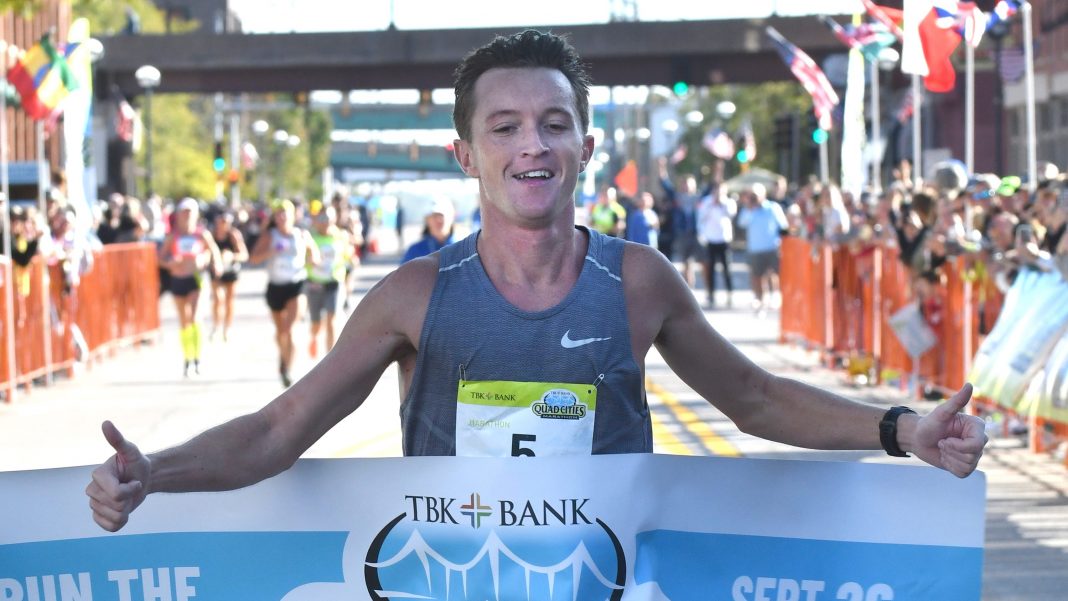 Tyler Pence achieved a personal best en route to winning the Quad Cities Marathon along the Mississippi River last weekend, but the event was determined by a different mode of transportation.

Midway through the race, Kenyan runners Elijah Mwangangi Saolo and Luke Kibet were far ahead of Pence, but were disqualified after a race volunteer bicycle steered them to a false turn.

The victory earned the United States its first Quad Cities Marathon champion since 2001, and Pence received a $3,000 first-place award.

In his debut race, Pence, a 28-year-old track and cross-country coach at the University of Illinois-Springfield, set a personal-best time of two hours, 15 minutes, and six seconds.

Saolo and Kibet must have entered the race expecting anything other than disqualification. After the event, a very upset Quad Cities Marathon director Joe Moreno admitted the bicycle was at fault, fighting back tears as he told the Kenyans, “I messed up royally.”

Despite this, Moreno defended his race’s infrastructure, claiming that the section where Saolo and Kibet made incorrect turns was “well-marked” and had “well-displayed” signs. He also stated that the runners had a day before the race to familiarize themselves with the course.

Pence, who had seen Saolo and Kibet stray, had little problem retracing his steps.

According to the Quad-City Times, Saolo had recently created a GoFundMe campaign to raise money for himself, his wife, and two children to stay in the United States, but was disqualified and so missed out on prize money.

Moreno is seeking to correct the problem, calling the bicyclist’s failure “unacceptable” and calling for “better trained or certified” volunteers in future events.

The race director stated that he intends to pay Saolo and Kibet once he gets video footage of the bicyclist’s mistake.