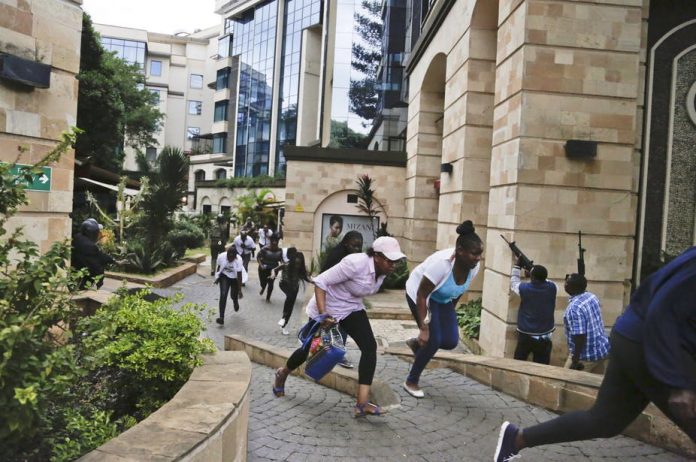 The Dusit hotel, which was part of the complex attacked by terrorists in Nairobi in January 2019, has reopened. 21 people died in the attack, bringing the number killed in terror attacks in Kenya to at least 300 in the past five years. These attacks have been traumatic for many of those affected. Stephen Asatsa tells The Conversation Africa’s Moina Spooner what needs to be done to support them.

How does trauma affect people who are directly or indirectly involved in a terror attack?

This means that initial interventions must target the hindbrain to normalise the body from its state of emergency. Meditation, breathing exercises, massage and physical activities – like dance and games – can all help to relax the hindbrain. Later it can process the traumatic event during long term counselling.

Once the body returns to normal, it is important to track unprocessed emotions and help the survivors to express them. Social support is one of survivors’ greatest resources for survivors. This can be offered by strengthening family and friend ties to promote long term recovery, even after counselling stops. Family members should also be actively involved in crisis interventions.

Untreated trauma is dangerous. It may develop into other mental health issues that lead to drug abuse, depression, anger and hatred.

What does research show about the type of trauma people experience and the effectiveness of counselling at overcoming it?

Threatening events lead to direct or secondary trauma. Direct trauma involves physically experiencing or witnessing the event – people who survive the threatening event, as well as those who may not have faced the threat but saw others being attacked. It would also apply to rescue staff like the police, fire fighters and doctors.

Secondary trauma involves people who were not physically present during the event but learn about it through others or through the mass media.

Symptoms are similar in both types of trauma. Traumatised people tend to be hyper vigilant, agitated, suffer from negative mood swings and avoid reminders of the crisis. But often, those who experience secondary trauma are neglected.

Yet research shows that from a single traumatic event, there are instances where more people have secondary trauma. For example a survey on the effects of terrorism in Pakistan reported 3.9% physical effects (direct trauma – meaning they were present at the location of the crisis), while 79.2% reported mental health effects (secondary trauma).

How prevalent has counselling been for those affected by terror attacks in Kenya?

Recently there’s been an improvement, possibly because of increased awareness and more trained psychologists.

In my study on the Garissa University terror attack survivors – in which 148 people were killed – I found that most survivors received counselling services. Only 16.5% didn’t. But a large number only had “critical incident debriefing”, which usually involves fewer than three counselling sessions. Survivors may need longer forms of intervention to give the healing process enough time.

I also found that women were more likely to attend long-term counselling. This could be attributed to cultural reasons: men are socialised not to ask for help even when they need it.

What type of counselling works best in these situations?

Many different approaches can be used to help terror survivors.

Psychological first aid focuses on initial emotional support offered to victims of trauma in a bid to reduce distress and prevent further trauma. This is not necessarily offered by mental health practitioners, but by any available helper.

Critical incident debriefing is offered to trauma victims with the aim of preventing the development of post-traumatic stress disorder (PTSD), a severe condition that could drastically affect a person’s normal functioning by keeping them withdrawn, highly agitated, restless, and sometimes suicidal.

These trauma interventions are the most prevalent forms of psychological support in times of crises. But they are short-term. Missing out on long-term counselling poses a threat to survivors’ mental health. Survivors of the Garissa terrorist attack, for instance, pinpointed a few painful experiences that slowed their recovery. These included the short term nature of counselling, counselling being stopped too soon and relatives being excluded from crisis intervention.

There needs to be a shift to long-term counselling which targets the survivors, their family members, rescue workers, counsellors, news reporters and the general public.

Are there lessons from other countries on how best to support victims?

There’s a lack of awareness in Kenya about the importance of mental health. This may be partly why people don’t seek out counselling. In some developed countries, by contrast, mental health is fully entrenched in public health institutions.

In Kenya, the mental health sector is not well regulated, compromising the quality of services. Legal frameworks – like the Counsellors and Psychologists Act of 2014 – haven’t been implemented because of competing professional bodies that make it hard to monitor the profession. The ministry of health also seems reluctant to register and license counsellors and psychologists, which could be the reason why humanitarian organisations often take the lead in coordinating psychologists during a crisis.

If the government allocated funds to mental health, and took it seriously, there would be better services for survivors of traumatic events, like terrorism, who would receive proper psychological help.