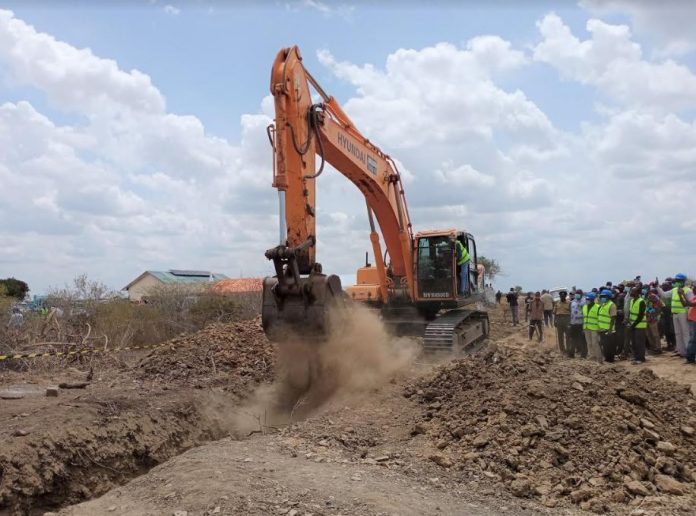 Residents of Bamba ward in Ganze, Kilifi County can now sigh with a relief after the launch of the 43.6 kilometres water project in the region. – By Ramadhan Kambi.

The project which was officially launched by governor Amason Kingi is expected to end perennial water shortages and the suffering for thousands of households in the region classified as Arid and Semi-Arid areas.

Speaking after the launch of the project at Rima Ra Pera village, Governor Kingi said the project is going to change the lives of the residents and that it was one of his vision to have the project in the area because of its significance to the people.

The 43.6km Bamba-Shirango water pipeline is jointly funded by the County Government of Kilifi and the European Union through water Sector Trust Fund(WTF).

“We are here today to launch this mega project which for the first time will bring fresh water to the residents of Bamba to Shirango. Under this project, we expect about over 11,000 households in Rima ra Pera, Midoina and Ndharako areas to benefit,” said governor Kingi.

The governor said that constant access to clean drinking water is necessary for a society to progress from poverty to function society and he was elated when finally, the project was approved a move that will ease the suffering the community has endured for many years in as far as clean water is concerned.

“This project is being funded at a cost of Sh100.2 million with the Kilifi County government contributing sh13 million which represents 13 per cent of the total project cost contribution of Sh13 Million.

Among those present during the ground-breaking ceremony included area MP Teddy Mwambire who said that the project will change the lives of the residents by a big margin.

Mr Mwambire who was among the officials who signed the agreement with
WTF in Nairobi for the project said the community has suffered for many years and that th3e project was as big relief to them.

“I worked hard for this project to come home and we finally signed the deal in Nairobi and that marked the begging of new era in water resources in Ganze. I want to also thank the governor for his efforts in ensuring that this project is finally home and sound,” said Mr Mwambire.

County water and natural resources executive Kiringi Mwachitu said the project is a milestone to the community and it will go along way in alleviating the suffering of the community.

Water Sector Trust Fund CEO Ismail Shaiye assured the residents that the project will be completed within the set time-frame and they will soon benefit from it.

“The project is expected to be completed in a period of six months, so I want to urge the community to make sure that this project becomes successful. Let us all support it to make sure that it is completed within the estimated time so that you can start getting this precious commodity,” he said.

The residents termed the project as a game changer after many years of suffering because of lack of piped water.