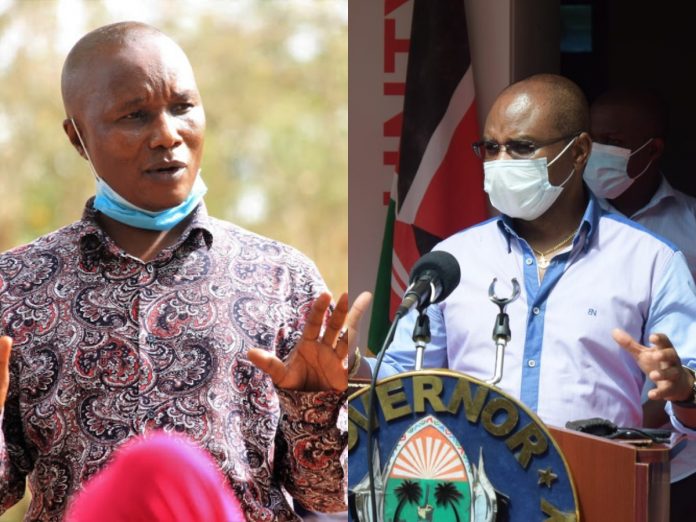 Coast MPs now want Kilifi Governor Amason Kingi to come clear on his intentions to form the regional unity or else his efforts might be misunderstood. – By Ramadhan Kambi.

The MPs through Coast Parliamentary Group (CPG) Secretary Teddy Mwambire said they had at times tried to talk the issue of regional unit with the governor but has failed to answer their question pertaining the formation of the party.

The Governor should own up to his failures. We raised critical questions during our meetings with him and has failed to answer them to date. He should not address us from funerals after failing to unity even the seven MPs from the region,” Mr Mwambire said in a statement.

The Ganze MP and Orange Democratic Movement(ODM) Vice-chairman in Kilifi County said the Governor should not engage in blame games but must begin to look at where the rain started beating him.

“It is premature for Governor Kingi to start a blame game instead of addressing the misgiving of the leaders,” he said.

It is in this burial that the governor cried foul over laxity by some regional MPs to buy into his Coast unity agenda.

The Governor said it was unfortunate that the push for the regional unity has been left in his hands, saying that it was not his affair but an effort that should be embraced by both the majority and sundry in the entire region.

“When I started this push for Coast unity, it must be known that this was not a Governor Kingi affair but the thoughts of the entire region that after many years of depending on non-coastal parties, it was ripe for us to have our own Coast party (Tufe),” the governor said during the burial.

He further said that after he initiated the push for the Coast unity, he has on several occasions tried to have meetings with Coast MPs but some are very reluctant to give in to the idea.

“I have been trying to bring our Coast MPs for talks on this push for unity, but some have been uneasy with the idea. Kindly let us understand here that the push for Coast unity is not about Kingi. It is not my unity but a unity of the entire region,” he said.

The Governor added that with the kind of attitude he is seeing from leaders about the unity, there is likely high danger that the region might end up in welcoming outside political parties as it is the norm.

“With this kind of situation, there is danger that even in next year General Election, this region might still embrace outside political parties. Kindly let us rethink of our political direction to take as coast people,” the Governor said.