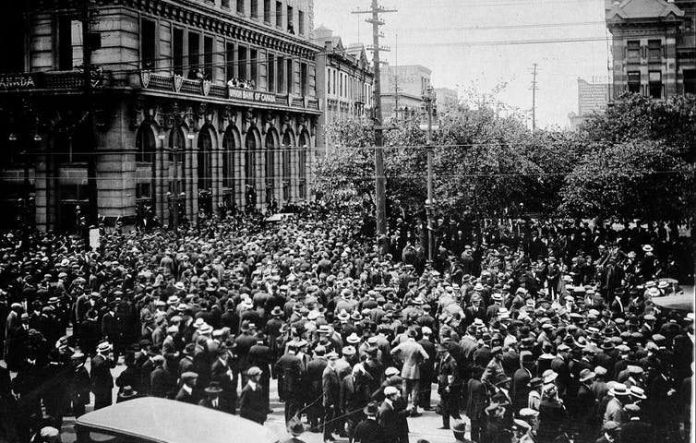 A century ago, the Winnipeg General Strike shut down what was then Canada’s third-largest city. Today, the strike is usually remembered as a moment when workers demanded the collective bargaining rights and living wages that are defended by today’s unions.

While we might be tempted to see the strike as an event that belongs strictly to the past, how we understand the past influences how we see the future. And the Winnipeg General Strike is no exception.

More important, what workers did in Winnipeg a century ago may be more relevant to our future than most people think. The Winnipeg General Strike of 1919 provides important lessons of worker solidarity and action that we may need to pay close attention to as workers’ struggles are likely to intensify in Canada.

Nothing quite like the General Strike has happened in Canada since 1919. Although the Common Front strikes that shook Québec in 1972 resembled it in some ways, the framework of labour law that’s been in place since the 1940s has restricted workers’ actions.

So the Winnipeg General Strike wasn’t a strike of the kind we’re familiar with today. Most historians tell us that Winnipeg’s construction and manufacturing workers were fighting for basic union rights in the difficult circumstances after the end of the First World War and that their efforts boiled over into a general strike because of the intransigence of employers.

However, this story doesn’t fully capture what happened in Winnipeg.

Historian James Naylor has argued that what happened was “in many ways more of a local (and potentially regional and national) revolt than a strike.”

Aspirations for a better city

In remarkable solidarity, the strike brought together union members with non-unionized workers. Workers also infused the strike with aspirations for a better society that they would help create by their own efforts.

Workers rejected the domination of their city by capitalists at a time when many people across Canada and around the world were questioning the social order that puts profit before people and had caused the First World War.

That’s why employers conspired with the federal government to break the strike. Police killed two strikers. In the aftermath, a small number of people were deported and many more strikers lost their jobs.

However, this defeat didn’t lead to union rights as they exist today. Those were instituted starting in 1944 to quell a massive wave of law-defying strikes during the Second World War.

The next upsurge could be coming

The way the struggles of unionized workers in Winnipeg grew into a citywide strike isn’t the only way ordinary people can launch a local revolt.

Could some popular upsurge happen in Canada in the next century? I think this is a real possibility because of the economic and ecological crises we face.

We are currently experiencing what economist Michael Roberts calls a “long depression” — similar in some ways to the economic slump of 1873-97 and the Great Depression that started with the 1929 stock market crash and was only brought to an end by the Second World War.

More recently, the Great Recession of 2008-09 ended the period of global economic expansion that started in the early 1980s. A new wave of investment has still not begun.

It will take deep economic restructuring to reboot global capitalism. These changes will surely bring more severe job losses, work intensification and austerity. When a new period of economic expansion eventually begins, we could see more employers decide to invest in advanced technologies that will make work worse for many workers and eliminate more jobs.

The impact of climate change

Climate change and other aspects of the global ecological crisis are going to have significant effects on society. We don’t know just how catastrophic climate change will be. But the environmental crisis caused above all by capitalism’s addiction to burning fossil fuels will get worse. We are on course for global temperature increases dangerously higher than the maximums agreed to in the Paris Accord.

Many earth system scientists are warning that human activity is destabilizing “the only state of the planet that we know for certain can support contemporary human societies.”

A new climate regime will have far-reaching effects on society. It will be expensive for governments to respond to damage caused by more extreme temperatures and precipitation, more severe storms and flooding, and more droughts and wildfires.

There will also be costs connected to the effects of climate change on water supplies, agriculture, urban life and more. These costs will increase the pressure on governments to slash spending on education, health care and other public services.

The combination of economic restructuring and how governments respond to the ecological crisis could create a major social crisis in Canada. In such conditions, a popular revolt would be entirely possible. We may find clues for what it might look like in anti-austerity struggles in Greece, the gilets jaunes movement in France, and teachers’ strikes in the U.S. – all recent experiences where the usually-muted antagonism between the working class and the dominant class has flared into class struggle.

In such a situation, the lessons of the Winnipeg General Strike about the power of far-reaching solidarity and the danger of state repression would be directly relevant.