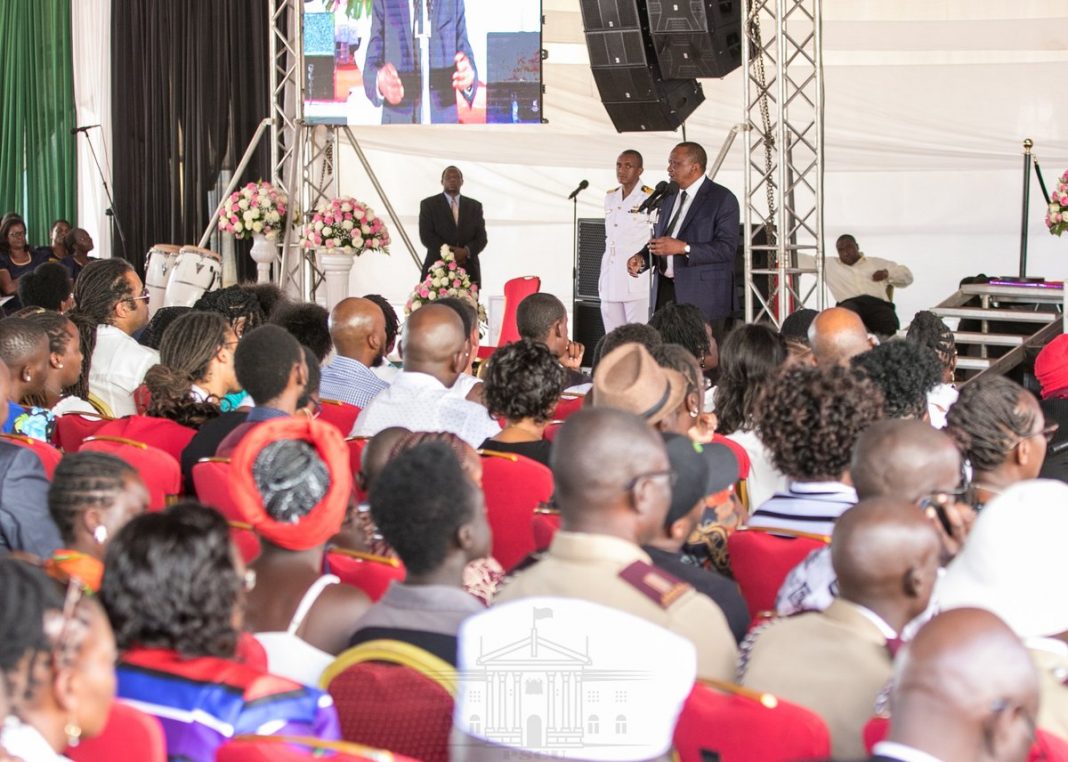 President Uhuru Kenyatta has today called on leaders to first unite in the fight against corruption and join hands in ending tribalism before sinking into the 2022 succession politics.

Speaking  in Seme Constituency during the burial of Mama Dorka Owino, the mother of Governor Prof. Peter Anyang Nyong’o of Kisumu County, the President Kenyatta  said corruption and tribalism were holding the country back from achieving its full potential.

“We must fix these issues first. Politics will come later. We must fix these vices so that the country can move forward as a stable, strong and harmonious nation where jobs can be created,” said the Head of State.

He said the right against corruption, ensuring inclusivity and ending tribalism were top of the agenda in his discussions with opposition leader Raila Odinga ahead of historic March 9, 2018 handshake which gave birth to the Building Bridges Initiative (BBI).

The President said the country should be able to demonstrate political maturity by eradicating divisive politics and build a nation where all Kenyans have a sense and feeling of ownership and which gives investors confidence.

“We want to attract long term investors where people can invest their money for between 15-20 years and over,” said the President.

The President called for humility and patience among politicians saying leadership is not about how much wealth an individual amasses but how many lives each leader is able to touch and impact positively.

He said leaders will be held accountable by the people over the responsibility entrusted on them.

President Kenyatta eulogised Mama Dorka Owino as selfless and generous matriarch, and extraordinary leader who advanced  the cause of women and girls around her, including starting a girls hostel in her Ratta ward from where 26 students have joined various universities.

He said a time is coming when all individuals engaged in economic crimes will be “swept to the sea”.

Raila said the current anti-graft efforts are aimed at removing the country from the list of nations with the highest levels of corruption adding that Kenya cannot achieve meaningful development as long as “thieves” continue with their pilferage of public resources.

Prof. Nyong’o said the much talked about referendum should only have two choices about either the parliamentary  system of governance  or the presidential one noting that the latter has failed in many countries.

The leader of the minority in the senate James Orengo said President Kenyatta is doing the right thing on matters of corruption and in his efforts to unite the country while the Council of Governors (CoG) Chief Whip Prof. Kivutha Kibwana expressed optimism  that Kenya is on the right track of socio-economic growth.

“Kenya is in good hands. There is hope. We have a good future,” said Kibwana who represented CoG chair and Kakamega Governor Wycliffe Oparanya.

The thousands of mourners who included governors, MPs and members of the larger Nyong’o family came from all over the world including the US, New York, Israel and Uganda.

Mama Dorka passed away at her Nairobi home on May 28, aged 99 years.