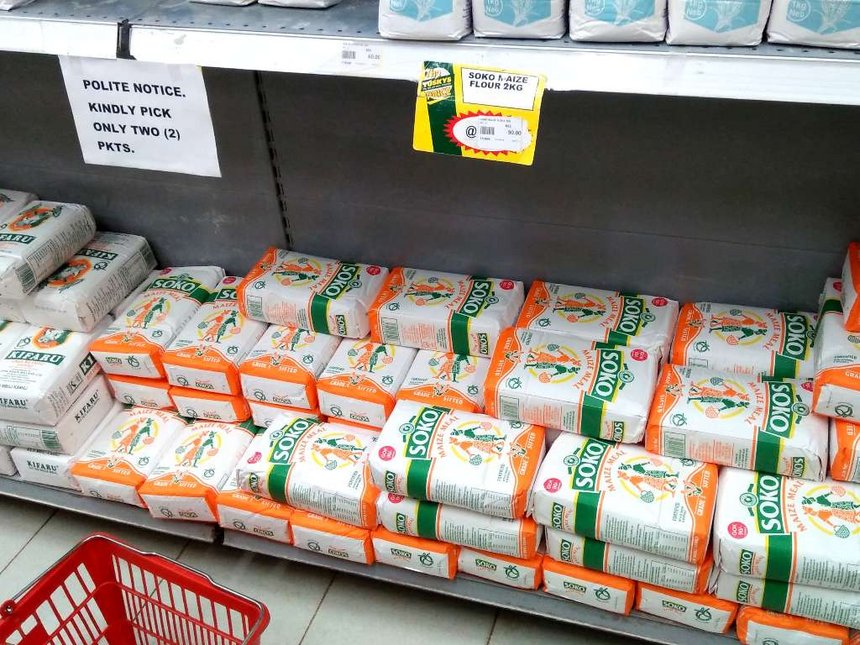 BY PETER WAFULA – You now have to dig deeper into your pockets in order to continue enjoying a bowl of ugali, a delicacy considered as staple food by majority of households in the country. This is the stark reality facing millions of maize flour consumers. A spot check in the market reveals an upward spiral of the commodity’s prices over the last two weeks with some brands having increased the price by Ksh.30 for a 2 kg packet of maize flour.

On retail stores shelves, leading maize flour brands Jogoo, Hodari and Dola 2kg packets are selling at ksh 109, ksh 107 and ksh 106 from ksh 79 and ksh 77 respectively. Two weeks ago, a price increase of between sh29 and sh30 with a likelihood of further increase of price unless drastic intervention to stabilize supply is urgently undertaken.
Maize millers have justified the upward prices review citing shortage of maize in the country. The move comes despite government’s assurance that the country has enough maize reserves to cushion Kenyans against hunger that has ravaged some parts of the country.

Maize sector has been riddled with controversies stemming from alleged corruption in the National Cereals and Produce Board, a body mandated to buy and stock maize from farmers over existence of a
cartel that is accused of importing maize leaving farmers at the mercy of middle men who offer low prices for farmer’s produce.

While the millers cite shortage of maize, some farmers in the maize growing regions have in their stores last year’s produce protesting what they term as low prices offered by the NCPB.

In a free economy market that currently exists, prices of commodities are left to be determined by market forces of demand and supply. Past attempts by the government to subsidize maize flour prices have proved short term with experts warning against attempts to impose price control on commodities.