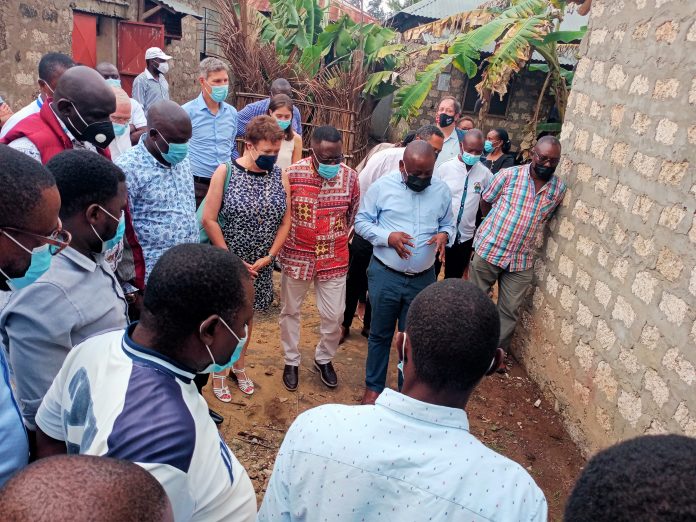 For Malindi residents, getting tap water for both commercial and home use will now be under the watch of a digital metre where one fills a token and get water. – By Ramadhan Kambi.

Similar to electricity token payment system, the same technology has now been applied to water users in Malindi and Watamu, in Kilifi County, thanks to a Sh53 million project funded by the French government.

The new digital water metering system will ease accountability of water usage by companies and solve the problems of losses incurred by water companies.

The project was funded by the French Government in form of a grant to Malindi Water and Sewerage Company (MAWASCO) in Kilifi county and implemented by a French company called city taps which is globally known for developing technological solutions for water usage.

French Ambassador to Kenya Aline Kuster-Menager said her government gave the funding in form of grant to help provide water services by use of digital technology.

Speaking during the officially opening of the first phase of the project that constitutes installation of the systems and 600 digital water meters in Watamu area of Kilifi county she said their target is to install 3,000 meters upon completion.

“I am here today to officially launch the project.It’s a Sh53 million grant from the French Government to support installation of this technology through French companies’ City Taps together with the county and the water company in Malindi,” she said.

The Ambassador said the idea is to enable citizens to get water on a pay as you wish solution and also to detect leakages in the system which is also a best way of making the best use of the water.

She said for the Malindi Water and sewerage company it’s a win-win situation as the system will enable it to get back its money, detect leakages, and improve efficiency of the system.

“It’s a connected solution whereby both the operator, the water company and the consumer access technology through the internet and through their mobile phone,” she said.

She said they hope their new technology will get new customers in other counties adding that Kilifi county shall be their ambassadors to promote the technology.

Kilifi Deputy Governor Gideon Saburi who was present during the launch hailed the French Government for funding the project through Malindi Water and Sewerage company which is under the county and the cooperation exhibited in making the project a success.

“Payment of bills has been a challenge to wananchi, normally bills accumulate and people fail to pay fo9rcing water companies like Mawasco to disconnect water but this project will end the problems,” he said.

He said the system will end water meter theft which has been rampant in the county as it shall be able to detect any theft.

“There were some worries from staffs who thought they would lose jobs because the meters are self-catering as they read and shut down meters. But it took long for the staff to appreciate this project,” he said.

Some of the consumers he said also doubted the meters and thought they were overcharging but through sensitization, the customers appreciated them.

Mr Mwambire apealed to financial institutions to come in and support them so as to increase the uptake of the meters.

“A customer loads money any amount in their mobile wallets and a system is able to calculate the amount of consumption in terms of litres and it takes that information between the customer’s meter and our system through a platform called the gate waves,” he said.