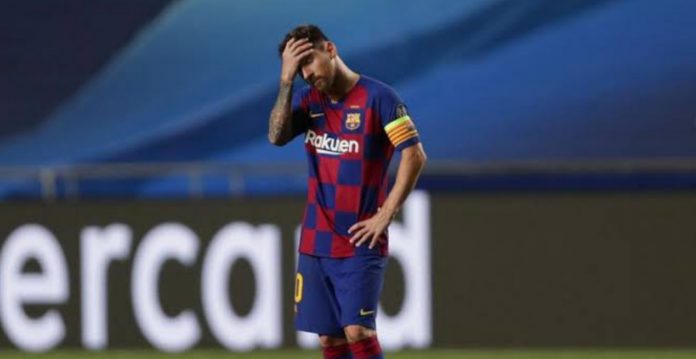 No smile, no handshake and no reconciliation. Lionel Messi is staying at Barcelona but this was no happy ending. It is over, for now, yet there is no real closure and no one truly got what they wanted, maybe not even Josep Maria Bartomeu. A survivor clinging to power, he will no longer preside over the departure of the best player in the club’s history but nor will he evade responsibility for it. His victory, if that is what this was, is hollow one. Messi made sure of that.

The prospect of his leaving after 20 years at Barcelona was sad and has been avoided for nine months but that was never the worst part. The worst part was that it had got to the point he wanted to leave; that things were so bad, so broken, he would turn his back on it all. And that remains; it has not been fixed by Messi staying, still less by Bartomeu surviving. “I wanted to be happy,” Messi said, “and I didn’t find happiness at the club.”

Doing so now may be difficult; his final decision, taken under duress, did not deliver it. This whole thing was not an act: before, during or, most striking of all, after. It was not a power play, nor a push for a new contract. Messi announced he was staying at the club he “loves” but there was no new deal, no promises, no pretence. Instead, there was sadness as he talked, which he did not on a club channel but on Goal.com. Hours later, Barcelona’s website still had not even mentioned it. It was supposed to be good news, the very best news, but it was not news at all.

There was no celebration, just a kind of weariness. From Messi, there was a blunt honesty, a refusal to gloss over this or act like everything was OK, their differences resolved. He could have backed down, could have said he had felt conflicted, could have asked to draw a line under this whole sorry saga or tried to build bridges, but he did not. He could have said it was a moment’s madness. He did not do that either.

He admitted he wanted to go and accused Bartomeu of reneging on an agreement to let him. He said he had been telling Bartomeu all year, that he had thought about it carefully and that his time was up; it was for others to take over now. He could even have said that he wanted to benefit the club, help them economically but he did not do that either: insisted he was within his rights to rescind his contract and walk for free. Only one thing had stopped him: the risk of ending up in court. Nothing else.

All he wanted to avoid was a fight, but he was not backing down from one either – at least not with the man he held responsible for the fact so much was wrong. The best part of breaking up is the making up but there was no making up with those in charge. On the day he stayed, far from peace, there was a statement from his father reasserting Messi’s legal right to leave. Sure, there was talk of love for the club and the revelation that his children had cried but he would not allow that to serve to protect the president or pretend he welcomed this outcome.

Many supporters are with him on that: plenty wanted him to go, for his sake not theirs, a curious phenomenon emerging in which some of those most on his side backed his departure and some of those most turned against him demanded he stay. His supporters were saddened and hurt but saw other villains and felt he had earned the right to decide. Listening to him joylessly explaining the decision to stay, they would have agreed.

Messi remains, which should be something to be thankful for, but it did not feel like it. Not least because he would not hide behind a facade. Sometimes when players walk out, they deliver a parting shot; Messi delivered his when he walked back in again, the honesty brutal. There are acrimonious splits; this was an acrimonious reuniting.

Read that line again: “I’m staying because the president said the only way to go was to pay the €700m clause, which is impossible, [or] the other way was to go to court.” This from the club captain.

“For a long time now, there has been no project or anything. They’re performing a balancing act, plugging holes as they go along,” Messi said.

Shock as 60 Nuns Die after Showing Coronavirus symptoms in Tanzania