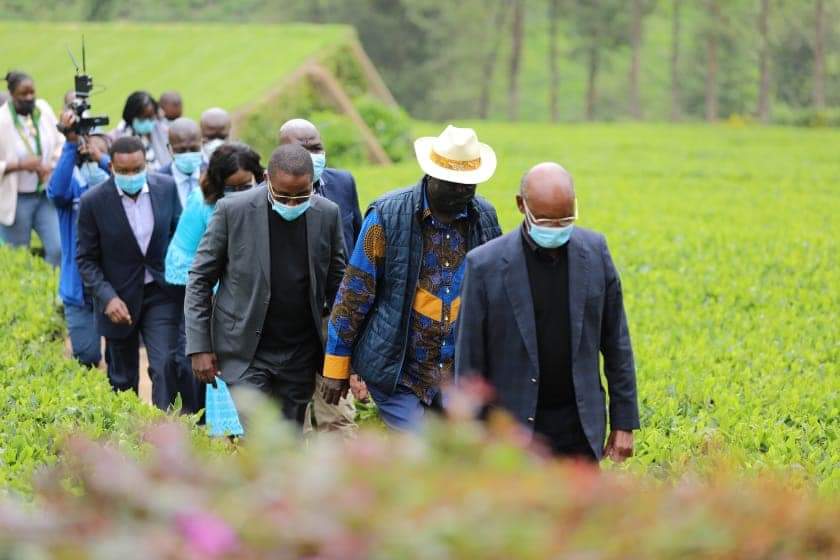 ODM leader Raila Odinga was treated to a symbolic welcome in Murang’a county when he led a troop of leaders to address the vote-rich region.

Raila was flanked by Key figures such as Governors Ann Waiguru, Mwangi wa Iria, Muthomi Njuki, James Ongwae, Senator Orengo, and local MPs who took to the podium to express their support for a Raila presidency.

The event, akin to the 2002 Coalition pact between Raila and Former President Mwai Kibaki, saw regional leaders pledge their support to the supremo.

Kiambu Governor James Nyoro revealed that the region is indeed warming up to the former archrival to President Uhuru.

“We had a meeting in Meru on Saturday. We agreed that all our votes will be put in one basket. We will not divide them. But some people started attacking us. Today we are saying all those votes, former Prime Minister, will come to you,” Nyoro declared.

As for Peter Kenneth who was once a presidential aspirant, the ODM leader needed to make way in the region inorder to earn the trust of the people.

“This I want to ask of you, Jakom,” Kenneth said. “Traverse Mt Kenya. My home is just one and a half kilometers away. Sometimes, come and spend there, go to church in Gatanga. Move so that people can know jamba [hero]….We shall show you around. We shall volunteer,” he said.

Although the ODM leader has not stated if he will run for president next year, it is commonly assumed that Mt Kenya tycoons who have financed previous presidential campaigns concur with Uhuru’s strategists that Raila is the region’s best option.

Despite its appearance as a private ceremony honoring musicians, the event was rife with political implications, with Uhuru’s allies urging the region to support Raila in his bid to succeed him.

This was Raila’s first appearance at a high-level event in the President’s backyard, and it indicates that Uhuru’s allies are working hard to promote the ODM leader in the region ahead of the 2022 elections.

“We have come here and you see the face of Kenya is here. A new dawn has started here at SK Macharia, a new dispensation that will unite Kenyans from all walks of life,” Raila said.

Waiguru stated that the region will not waver in providing votes to their favorite candidate, and 2022 will be no exception.

“As Mt Kenya we don’t go left and right. At the ballot we shall cast our vote in one basket where our interest as a community is well taken care of,”.