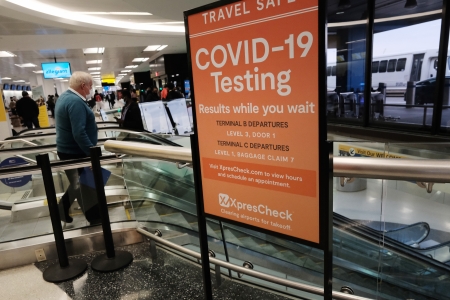 Fears over the impact of the Omicron variant of the coronavirus rose on Thursday after the first case was reported in the United States.

The first known U.S. case was a fully vaccinated person in California who returned to the United States from South Africa on Nov. 22 and tested positive seven days later.

President Joe Biden is working on the U.S. strategy for fighting COVID-19 this winter and sources briefed on the matter told Reuters one step will be extending requirements for travellers to wear masks through mid-March.

A formal announcement is expected on Thursday, the sources said.

Airlines in the United States were told to hand over the names of passengers arriving from parts of southern Africa hit by Omicron, according to a U.S. Centers for Disease Control and Prevention letter seen by Reuters.

Early epidemiological data revealed Omicron was able to circumvent some immunity, but existing vaccinations should still protect against severe sickness and mortality, according to South Africa’s National Institute for Communicable Diseases (NICD).

Maria van Kerkhove, an epidemiologist with the World Health Organization (WHO), said at a press conference that data on Omicron’s contagiousness should be ready “within days.”

The vaccine BioNTech is developing in collaboration with Pfizer (PFE.N) is expected to provide excellent protection against severe Omicron illness, according to BioNTech’s CEO.

Financial markets have been startled by early evidence that Omicron is significantly more contagious than earlier varieties, fearing that new restrictions could suffocate a fragile recovery from the pandemic’s economic ravages.