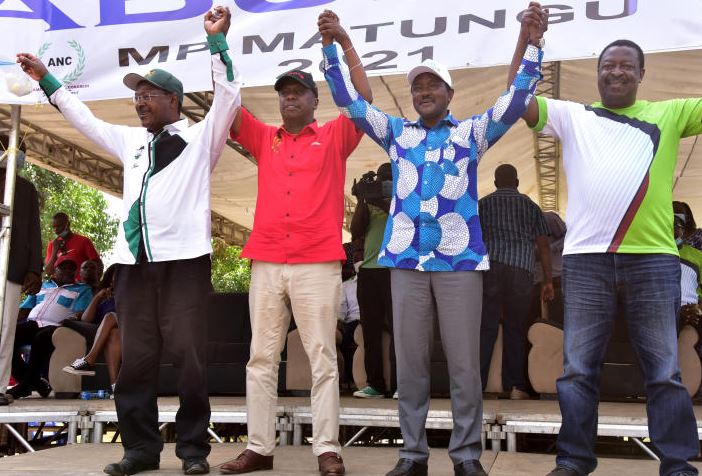 OKA leaders held a meeting to get report from technical committee and forge a way forward. Kanu in a statement said Gideon Moi, Kalonzo Musyoka, Musalia Mudavadi and Moses Wetang’ula will be presented.

“Chairman Hon. Gideon Moi arrives in Karen ahead of the consultative meeting with other One Kenya Alliance Principals to review the report of the technical committee on the status of the alliance. Also present is Fafi MP Hon Abdikarim and the Executive Director, Mr. Wainaina,” Kanu tweeted.

Earier this month, the alliance met and deliberated on how to strengthen their unity ahead of 2022 after reports hint the media that Moi was ditching them for an alliance with ODM leader Raila Odinga.

In his response, Wiper party leader Kalonzo Musyoka said the meeting was also attended by elected leaders from the OKA parties who discussed ways that they can strengthen the coalition.

Today’s meeting comes about three weeks after Mudavadi said OKA was still in an ongoing conversation that has been in existence for a few months and that they were still looking at a few things before it can become an official coalition.

He noted that there was going to be more political alliances in the days to come.

“There are technical teams behind the other parties going through some very technical issues that can then be subjected to further political consensus before we can consummate a formal coalition,” Mudavadi said.