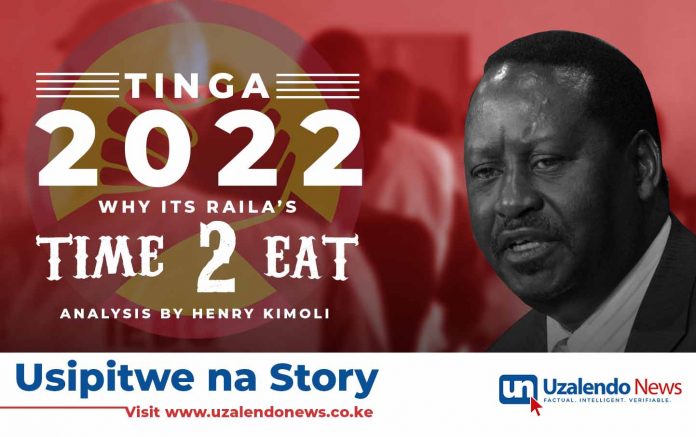 He has confirmed what Kenyans, political commentators, and the world already knew: That President Kenyatta has traded his feigned fiercest rival-Raila Odinga for his rank outsider Deputy President William Ruto.

Murathe, speaking during a Live Show at KTN, said it was time to pay Raila’s debt. For what and by who is anyone’s guess.

Murathe is spot on. Because, unlike other activists, Murathe chewed real books at the University of Nairobi and is a fearless animal.

At a tender age, he shared revolutionary ideas with Raila. Both were fed up with President Moi, barely five years into his Presidency. This is called ambition.

No need for pretense. Raila is the most popular political figure in Africa today. In Kenya, he commands the admiration and respect of all communities. The youth, the most voters by demographics view Raila as one of their own.

On a fair, straight contest, Raila can vanquish any political opponent. And so the endorsement by Murathe (read President Kenyatta and deep state) is the icing on Raila’s big political cake.

During his perennial battles with KANU, the hawks said he could only be voted for by the Luo. Raila has outgrown the Luo community and is now a darling of all communities. He is therefore an easy sell if the right props are identified.

He imagined that GEMA votes were his because he thought he had rallied his Kalenjin backyard to back Uhuru.

Ruto failed to reckon that the Uhuruto ticket was not dependent on him but was crafted by the deep state. The same deep state made Mwai Kibaki President, using Raila as the glue. But it differed Raila’s coronation to pave way for Uhuru.

Now the same deep state has derailed Ruto for 2022…but not forever.

He can elect to follow the long route of patience and bid his time as a formidable leader…or follow the path of other populist leaders such as Kenneth Matiba, Jaramogi Oginga, and Masinde Muliro.

For DP Ruto, time is on his side, he is the youngest among the key players.

Depending on how the idea of following the longer route percolates among his supporters, the DP may as well be eased back to the real system.

He has practiced and enjoyed real power for five solid years and has an inkling of hope on how the Government operates.

He has been around for long. He knows his way in and around Government. He can be the surprise guy, but only if there is a change of plan. The deep state abhors vacuums and will manage the Kalonzo ambition until its sure its job is done.

The King of Mululu has failed to unite the Luhya nation to back his ambition.

Other than the Vihiga County and spot parts of Kakamega, Musalia has little support in Western.

The political cheese was stolen by Raila a long time ago and the Luhya nation is being assimilated into the Raila tribe-not Luo.

Numbers matter. Here, president Uhuru calls the shots. In the next two years, he will stop at nothing to consolidate this vote. No one has a stake here unless Uhuru says so.

But the community is ready to consume any budgets in anticipation until a candidate is introduced by Uhuru.

Michuki however, must be turning in his grave. Then the Minister for Environment, Michuki declared GEMA votes the property of the then Deputy Prime Minister Uhuru Muigai Kenyatta.