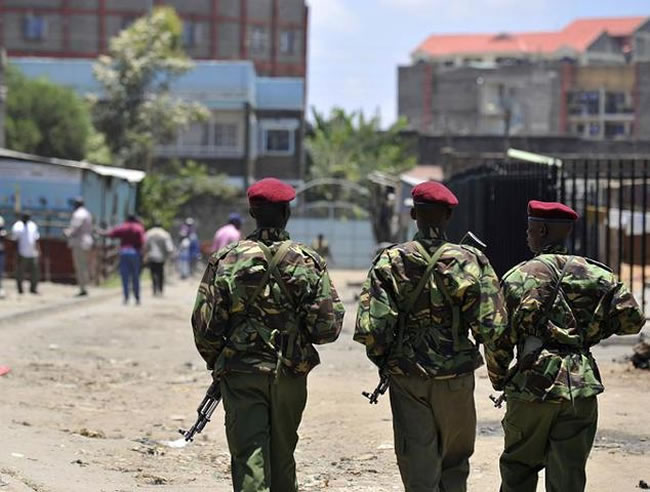 Did a Kisumu Senior Resident Magistrate play to the gallery in the indictment of Police Commanders in Kisumu over the senseless and brutal murder of Baby Samantha Pendo?

However, the indictment of Thomas Yoma, Christopher Mutune, Benard Kipkosgey, Nina Kosgey, and John Thiringi raises grave concerns over where the buck stops in botched operations.

When the murder was first reported, it triggered a full blown war of words between Jubillee and NASA leaders, with wild suggestions that the police brutality that occasioned the death was pre-mediated.

Violence against anyone is unacceptable. Violence against a defenseless infant is punishable by death through the hangman’s noose. But only after the facts have been laid bare in a competent court, interrogated, examined, corroborated and the author of the crime isolated.

On Baby Pendo’s case, commanders deployed Police officers to deal with riots. The chaos was not started by the commanders. It was threatening to spill out of control. Were they expected to be passive and not act to prevent destruction of life and property?

Of course Pendo’s death must awaken our national fabric on the sanctity of life and protection of infants. But we must ask ourselves about who bares the highest responsibility to the circumstances under which Samantha died.

In one stroke of a pen, the magistrate has opened floodgates for prosecution of senior officers over the actions of their juniors.

In a nutshell, the traumatic death of Samantha Pendo, a helpless infant over election disputes she knew nothing about will now condemn police bosses to the dock…over crimes they never actually committed.

The jury is still out there as to what happened. And we will wait for the DPP to establish culpability.

Make no mistake here. The judgment as read by the learned magistrate must and should be respected. But it must be put in perspective that all other operations that have yielded brutality in the past must be investigated afresh. And the Police commanders at those jurisdictions probed for culpability.

Add this to the hangman noose tightly placed on the neck of the former Ruaraka OCS Nahashon Muchiri Mutua, for murder, and you will understand why police bosses in Kenya are did not enjoy their Valentine Day.

For starters…the primary duty of police commanders is to deploy trained and appropriate officers to various duties as per the police standing orders and other related law. Based on competence of individual officers, their professional balance and temperament. Snipers are deployed in volatile areas, while sharp shooters belong to the flying squad and other elite formations.

Do they taken responsibility wherever stray fire neutralizes the wrong person?

The common practice in police modus operedi is that intelligence is availed on the nature of assignment, expected scenarios that may play out, and the officer encouraged using his initiative to execute.

With one command: use reasonable force, without compromising your personal security.

In the Baby Pendo case, officers were deployed to deal with violence occasioned by a tense election result. There is reason to believe that the procedure enumerated above was used.

In the Kisumu scenario, the officers on the ground had to deal with an hostile, blood thirsty mob, thereby threatening the life of the law enforcers and exposing the infant to mortal danger.

In the past, Police have killed civilians and officers killed or maimed by trained militia. This is information well within the knowledge domain of the three arms of Government namely: the Executive, the Legislature and the Judiciary.

Kisumu has been a hot bed of political tensions since 2007, when the PEV chaos led the near destruction of the town.

This means that the entire Government machinery is ceased of the nature and trajectory of the Baby Pendo case, giving it a bird’s high view to adjudicate.

Courts of law are moved by evidence. But an inquest is not a court of law and lacks jurisdiction to decide the guilt or innocence of the parties.

As a nation we must however take cognizance of the fact that a crime cannot be authored commanders. It is an individual, with a force number, identity and a pay slip.

If Police commanders are to bear blame for the actions of omission and commission from their officers, then the threshold of this responsibility must be determined.

For example, will the commanders of the police squad that raided Jimmi Wanjigi’s home bear responsibility for the destruction of Wanjigi’s property now that the handshake has negated his crime?

Two: will the police officers who manhandled, harassed and tore into Miguna Miguna’s jacket at JKIA face prosecution?

The ruling is a major wake up call for police who arbitrary sent out their juniors to tricky assignments and fail to supervise them.

Two things are however clear. That whoever clobbered Angel Pendo bears the biggest responsibility over the crime. He or she must face the law.

The police bosses can only be charged with negligence to duty. Unless of course evidence is adduced that the commanders gave a shoot or clobber to kill order.

Which then brings us to the million-dollar question: On whose behalf were those orders issued and why? On the protests that triggered the police operation, who created the enabling climate for the protests bacteria to blossom?  Who was supposed to benefit from the sustained tensions over election?

Give the Police a break. Their work is to keep law and order. Detect and prevent crime. And arrest you when you finance your side kick to maim your wife because her face is wrinkled and you want to move on.