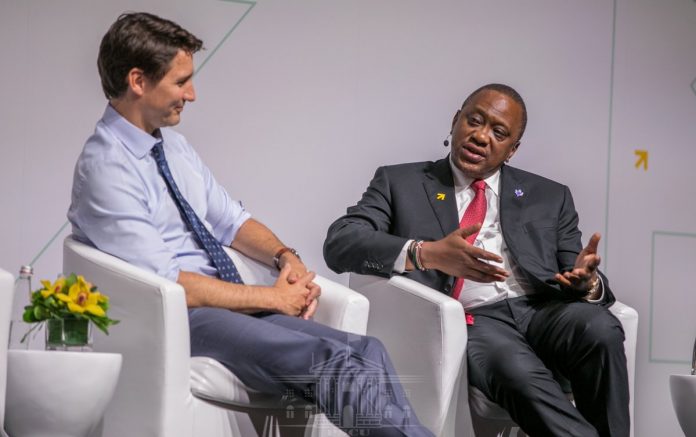 The Canadian PM thanked the President for honoring his invitation to attend the Women Deliver 2019 Conference and further applauded the Kenyan leader for successfully hosting a meeting of 18 African countries last year to discuss conflict and post conflict situations as a response to a request made to him by world leaders during the G7 Summit held in Quebec.

The meeting held on 22nd May 2018 resulted into the Nairobi call-to-action, a comprehensive road map with clear action points to be undertaken towards the empowerment of women and girls in Africa.

The two leaders acknowledged and agreed on the need to avail resources for the implementation of the road map and support for the various women and girls empowerment initiatives in conflict and post conflict regions of Africa.

President Kenyatta noted with gratitude Canada’s support for Kenya’s nascent blue economy sector especially the country’s commitment towards the set up of the Coast Guard Unit and the establishment of marine aquarium and fish processing facilities.

He thanked Prime Minister Trudeau for Canada’s role in the successful hosting of the Sustainable Blue Economy held in Nairobi in November last year.

“Let me also take this opportunity to thank you and your government for the technical and financial support accorded to Kenya during Sustainable Blue Economy Conference,” said President Kenyatta.

Prime Minister Trudeau lauded the progress made in the realization of the African Continental Free Trade Area (AfCFTA), a move he said will open up Africa to more world trade.

The Prime Minister expressed Canada’s interest to partner more with Kenya in trade, acknowledging that the country is the bridge to the expansive African market and a definite attraction to investors from the North American nation.

Prime Minister Trudeau and President Kenyatta affirmed their commitment towards enhanced bilateral relations between Canada and Kenya and agreed to work together towards the realization of each others bid for United Nations Security Council seat in the period of 2021-2022.

President Kenyatta wished the Prime Minister the best of luck as he vies for a second term during the elections scheduled for October this year and invited him to visit Kenya at a time of his convenience.

“All the best as you seek the people’s mandate for a 2nd term,” President Kenyatta told the Canadian leader.

“Let me also extend an invitation for you to visit Kenya at a time of your convenience,” he added.

In a separate meeting, President Kenyatta and President Addo of Ghana, agreed to strengthen further the deep-rooted historical and bilateral ties between the two countries.

The two leaders said, Kenya and Ghana have a unique role to play together in ensuring stability, peace and security in East and Western Africa respectively.

Presidents Kenyatta and Addo agreed to leverage on the Africa Continental Free Trade Agreement (AfCTA) to grow trade and people-to-people ties between Kenya and Ghana by enhancing air transport between the two countries.

Ghana alongside Kenya and Senegal have been identified to pilot the DELIVER FOR GOOD INITIATIVE that seeks to enhance good practices in gender equality.