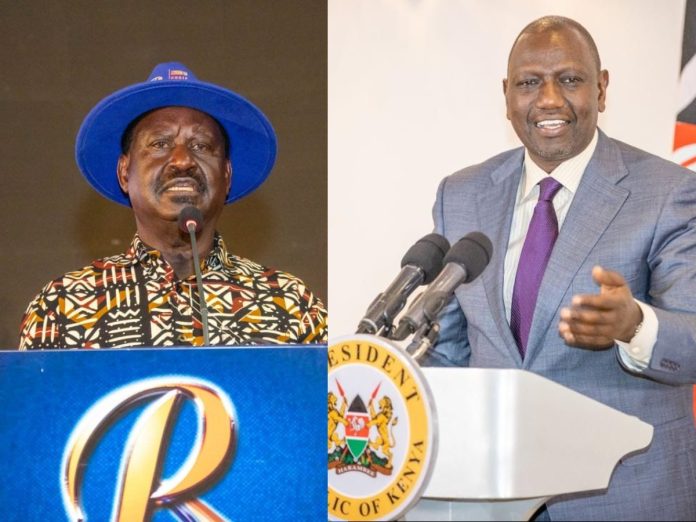 President William Ruto and Azimio la Umoja chief Raila Odinga engaged in an online spat on Friday over the fate of the four IEBC commissioners who are currently under investigation by Parliament for their fitness to hold office.

Raila launched the first salvo on Thursday, accusing the president of being a dictator for inflicting injustice on the four commissioners, Juliana Cherera, Irene Masit, Francis Wanderi, and Justus Nyang’aya.

Raila went so far as to say that the current regime reminded him of former President Daniel Moi’s tenure, which was marked by tyranny.

In a tweet, the president, however, turned the tables on Raila, slamming the former premier’s 2018 handshake with ex-President Uhuru Kenyatta, claiming that the deal was a clear form of state capture.

“The lords of impunity, who destroyed oversight institutions using the handshake fraud, should allow parliament to hold rogue officials who put the nation in danger by subverting the democratic will of the people to be held to account. New order is RULE of LAW not wishes of big men,” said President Ruto.

In response, the opposition leader reiterated his Thursday stance on Ruto’s rule, stating that the Executive should not meddle in the affairs of the Judiciary.

“There is due process and natural justice, things aren’t just done at the whims of the executive. The rule of law must prevail and not your jungle laws that you want to institute so as to subjugate Kenyans to a conveyor belt system of elections come 2027. We shall not relent,” said Raila.

The committee is expected to deliberate on the quartet’s fate for four days after hearing the petition.

The petitioners want the commissioners removed from office for violating the constitution as well as gross misconduct and incompetence.