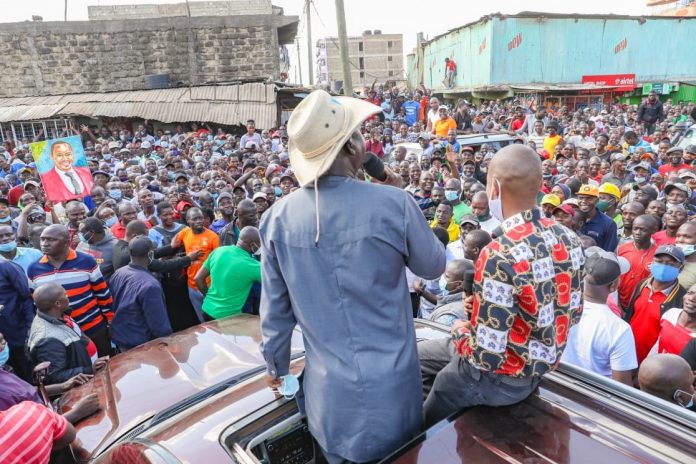 Raila Odinga has hit out at the Deputy President William Ruto, after he blamed the Building Bridges Initiative (BBI) for underperformance by the Jubilee government. – By Gerald Gekara.

Raila who addressed a mammoth crowd in Soweto Kayole, Nairobi County scorned the Jubilee party for blaming the opposition for its empty promises. He said he does not have an office to waste government funds on.

“Handshake has nothing to do with Jubilee. I dont have an office, I don’t have expensive government security. Those who have government offices, and security are responsible for those problems of theirs.” Raila said.

Raila cautioned residents against being victims of lies and false promises. He lashed out at Ruto’s wheelbarrow drive saying the government should work out solutions that last.

“The youths want skilled training, and access to funds to boost their businesses. A wheelbarrow is a short term solution and will not help you with anything.”

The sentiments come shortly after Ruto bashed the handshake team for taking part in dismantling Jubilee, and directing the government to misplaced priorities.

“The Jubilee administration decided on clear priorities, but unfortunately we are occupied with the changing of the constitution and creating positions for the big boys, at the expense of creating jobs for millions of ordinary people. ” Ruto said.