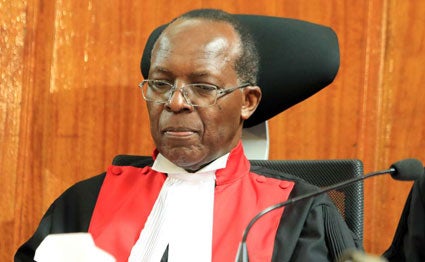 In its findings, the tribunal states that the evidence presented against Justice Ojwang’ didn’t meet the threshold to warrant his removal from the bench and declared the judge innocent of all the four allegations levelled against him.

“After adducing and analysing all the allegations made against the Honorable Justice, the unanimous verdict is that the Judge of the Supreme Court Justice Jackton Ojwang is innocent of all the allegations made against him and that he should resume his duties immediately,”  Chairman of the Tribunal Justice  Alnashir Visram said as his team presented their report to the President.

The investigation into the conduct of Justice Ojwang was initiated in response to a request by the Judicial Service Commission (JSC) made on 19th March this year.

The move by the JSC was triggered by a petition made by a Mr Nelson Oduor and eight others in which varied allegations of misconduct, incompetence and breach of the judicial code of conduct were made against the judge.

In the course of their investigation, the Justice Visram tribunal sieved through evidence presented by 25 witnesses and considered the applicable legal principles before arriving at the conclusion that Justice Ojwang innocent.

“Your Excellency, our unanimous recommendation, therefore is that Hon. Mr Justice (Prof) Jackton B. Ojwang, ought not to be removed from office and the current suspension should be lifted,” the tribunal notes in its report to the President.

President Kenyatta thanked the tribunal for executing its mandate judiciously saying, “you have done very well in promoting human justice”.

Justice Visram thanked the Head of State for the government’s support especially in ensuring that his team was adequately resourced.

Other members of the tribunal  present during the presentation of the report were Lucy Kambuni, Justice (Rtd) Festus Azangalala, Ambrose Weda, Andrew Bahati Mwamuye, Sylvia Muchiri and Amina Abdalla.